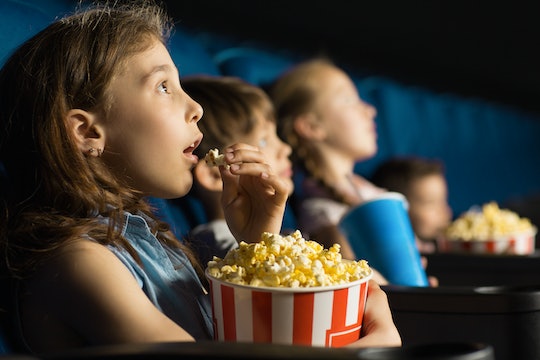 You really can't get much for four bucks these days. Maybe a venti frappacino from Starbucks or a gallon or two of gas. When you throw kids into the mix, your four dollars definitely stretch a lot less. As families everywhere start gearing up for summer, and the costs that go along with entertaining school-free kids for three months on end, one movie chain has stepped up to bat with an incredible solution for both boredom and pocketbooks. AMC is offering four dollar tickets for kids every Wednesday all summer, and you won't want to miss this steal of a deal.

Every Wednesday this summer from June 5 to August 14, kids can get admission to a family-friendly movie, kid sized popcorn, fountain drink and a candy for just four dollars, according to PopSugar. Yes, four dollars.

All movies will be G to PG rated and include family favorites like Trolls, Lego Movie 2, Small Foot, and more. A full list of participating theaters in available online.

Children under 12 must be accompanied by an adult, but don't worry. Parents can get in at the same four dollar price tag, according to Fatherly. Now that's a steal.

This is part of a major push from theater chains to get customers back to the movies, and compete with other options, like streaming, according to CNN. It might be hard to get people off the couch, but a tiny price tag just might do the trick.

Last year, AMC premiered their A-List loyalty program, allowing cinema lovers the chance to see up to three movies a week starting at just $20 a month, according to CNN.

The chain will also continue their Discount Tuesday promotion indefinitely for AMC Stubs members, a free rewards program for movie goers, according to the AMC website.

Take that and add it to the fact that the average large bucket of popcorn can run as much as $9, and you're looking at a huge price tag for a family of four, and you haven't even considered drinks or candy yet. So, $4 per person is looking pretty good right now.

Plus, a movie every Wednesday is a great break for some from the monotony and cost summer camps, where the average weekly price tag is about $314, according to Care.com.

Other movie theaters are running discount promotions for the summer. So, if you don't have an AMC near you, you can still score on a great deal. Just search kids movie camps and a few other (cheap) options should come up based on your location.

Cinemark is one such chain, offering $1 movies one day a week for ten weeks this summer, with concessions at an additional cost, according to their website.

Parents and kids have a ton of options for summer entertainment, but a an under five buck price tag just might make this one winner. Plus, two hours of quiet for mom or dad is truly priceless. See you at the movies!