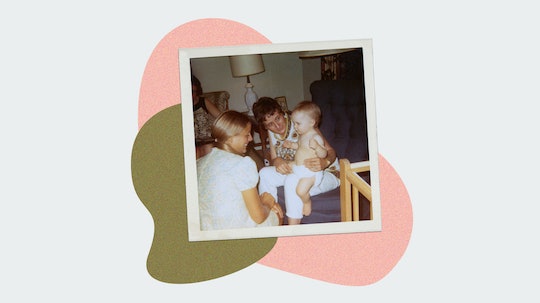 Looking Back On My Mother's Pretty Privilege

When we look back at photos of our mothers, the person we see tends to be defined by our own inevitable existence — they are our mothers, before we were there. Look a little closer, as do the essayists who contributed to Edan Lepucki's new anthology Mothers Before: Stories and Portraits of Our Mothers as We Never Saw Them, adapted from the Instagram project, and you see someone more complex. In an exclusive excerpt from the book, Amelia Morris, writer and creator of Bon Appétempt, reconsiders the difficult relationship she has with her mother through an old picture that makes her mother's beauty seem more a trap than a blessing.

I’ve wondered about this photo. It’s a strange one to have survived over fifty years and made its way to me. The main focus is the baby on my grandmother’s lap, a baby who, it turns out, is not a relative or anyone of great familial significance. My theory on how it endured is based on my own personal experience and practice of keeping photos where I look pretty and thin. And deleting all the rest.

Though I’ve never witnessed my mom do this, I have spent a lifetime watching her catch herself in the mirror and evaluate what she sees. On a recent visit, after not having seen me in a few months, she announced with shame, “You’ve probably noticed I’ve gained some weight.”

After my maternal grandma died, my mom sent me a photo album she’d curated from photos she’d found among Grandma’s things. Most of the images consisted of my brother and me as children. But the last pages shifted into black-and-white: serious portraits of my grandma and grandpa as forty-somethings or younger. And then this one — an outlier.

My mother’s beauty is the first thing I saw. Her hair is golden, stick straight and pulled into a tidy low ponytail. It might be the sepia quality, but she looks tan and unquestionably young. Until I sat down to write this, I’d barely noticed my grandma (arguably tied with the baby as the focus).

I hadn’t really considered my mother’s looks until I was about thirteen or fourteen and was snooping around some office drawers and came upon her wedding photos. (My parents had been divorced for so long that if these photos had ever been framed, I had no record of it.) I remember being shocked by the happiness behind her eyes, by her long dark-blond hair, which I assumed had always been short. I remember quite specifically thinking that she and my dad were a “glamorous couple.”

I know that she’s going to go on and on chasing this feeling that comes with quietly pleasing people, most of them men.

My mom and I have a difficult relationship. She’s a doctor, a Republican, and a Christian in the WASP tradition — this means that she doesn’t know how to hug with her whole body or sing hymns from the depth of her being. I’m a writer and a Democrat (if I must), and as far as religion goes, I recently read and loved a book titled Making the Gods Work for You: The Astrological Language of the Psyche. But this photo makes me feel something akin to empathy for my tight-jawed boomer mother.

It makes me think she must’ve come to realize at a young age that she was pretty and that her being pretty pleased people. When you’re pretty, you often needn’t say a thing to get a smile. Or a free drink. Or a second-round interview. I’ve heard this referred to as pretty privilege. And it is.

At the same time, it’s what makes me feel for her, this woman no older than twenty, because I know that she’s going to go on and on chasing this feeling that comes with quietly pleasing people, most of them men. She’s going to spend a lot of time being good, or rather, making efforts to appear so. In the years and decades after her marriage fails, she will repeat to me the same sentence — “I thought I could make him happy” — in a tone that implies she still doesn’t know why she couldn’t.

Because she’s going to have a daughter who is, I guess, not easy to please.

Excerpt from the forthcoming book Mothers Before: Stories and Portraits of Our Mothers as We Never Saw Them collected and edited by Edan Lepucki to be published on April 7, 2020 by Abrams Image.

More Like This
I’m Getting Dual Citizenship For My Jewish Children, Just In Case.
Instagram Captions For Your Cup Of Morning Coffee
Molly Yeh Draws The Line At Hot Pockets
Home Reno Culture Makes Me Feel Like I Live In A "Before" House