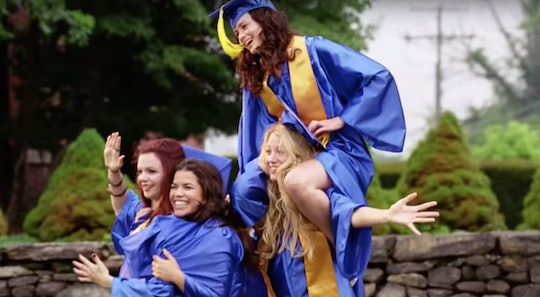 Listen, the world is kind of a mess right now. Unfortunately, politics have gotten to be more dramatic than any season of The Real Housewives has ever been. But, women are continuing to stand up for themselves in more ways than one. Which is why the news that America Ferrera celebrated her pregnancy with her Sisterhood Of The Traveling Pants co-stars is so incredibly welcome. Oh, and you're going to want to grab the tissues, because it's seriously sweet.

In case you missed it, Ferrera announced her pregnancy on New Year's Eve this Sunday with the sweetest Instagram post. In a selfie alongside her husband, Ryan Piers Williams, Ferrera captioned the photo, "We’re welcoming one more face to kiss in 2018! Wishing you #MásBesos in the New Year!" The two were both smiling, wearing festive 2018 New Year's gear, and Ferrera was seen holding up a onesie with "Mas Besos" written on it, which means "more kisses" in Spanish.

So, now, only a couple of days into 2018, Ferrera has reunited with co-stars Blake Lively, Amber Tamblyn, and Alexis Bledel to celebrate her pregnancy, as well as to stand together and work towards change in the new year. "Starting the New Year off with blessings from my Sisterhood. We’ve got work to do for the next generation. Let’s get to it," Ferrera wrote on her Instagram, along with the hashtag "#TIMESUP," likely a reference to the Time's Up initiative launched by powerful women in Hollywood to put a stop to sexual harassment in the workplace across the nation.

Tamblyn, who is also an outspoken advocate like Ferrera, also shared the photo of the cast reunited and mentioned the initiative as well. "Didn’t think anything could beat kicking off the new year with the #TIMESUP initiative, but then..." she wrote on Twitter. Time's Up, according to The New York Times, was started by "300 prominent actresses and female agents, writers, directors, producers and entertainment executives have formed an ambitious, sprawling initiative to fight systemic sexual harassment in Hollywood and in blue-collar workplaces nationwide."

Additionally, the movement is comprised of a legal defense fund to assist women who can't afford the possible repercussions in reporting sexual harassment. Lively, Tamblyn, and Ferrera have all posted about the Time's Up movement, and Bledel isn't active on social media, so it's unclear whether or not she's involved in the initiative. However, her involvement in the photo and both Ferrera and Tamblyn's captions seem to indicate that if nothing else, she supports it.

But, that's not the only point of Ferrera's post that fans are collectively sobbing about. At its core, her sweet Instagram is celebrating this next chapter of her life, and doing so with her dearest friends. And what makes Ferrera's pregnancy news even more exciting? The fact that she and her husband have been together for so long, and their love story is seriously one for the books.

According to People, the couple just celebrated their 12-year anniversary, and did so with a romantic trip to Iceland. According to the magazine:

The two first met when Williams, 36, cast Ferrera in his student film while at the University of Southern California. They became engaged in June 2010 and married in 2011.

So, clearly, they've been on the road to starting a family for quite some time, and it's pretty fantastic that they're able to do so according to when they want, not when society tells them to. But, in all honesty, just about everything having to do with Ferrera's life at the moment is pretty fantastic. She's got great friends, a great husband, and will definitely be a great mom.