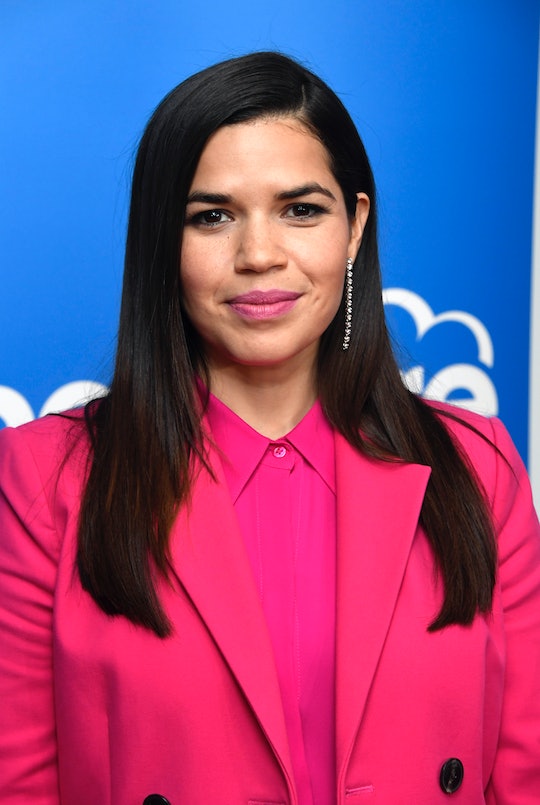 I don't know about you, but I've gotten a kick out of watching the young actresses I grew up watching on the big screen become moms. Hilary Duff, America Ferrera, Blake Lively — it's like we're experiencing life on similar timelines. (Only, you know, they're rich and famous. Minor details ...) More often than not, celeb-moms' sentiments about this whole child-rearing business are incredibly relatable. Slow-clap-worthy, even. In fact, America Ferrera's quotes about motherhood prove she's totally killing it as a mom.

In case you haven't been following along with her personal life, Ferrera and her husband Ryan Piers Williams welcomed a baby boy named Sebastian in May 2018, according to E! Online. The actress confirmed the exciting news via Instagram on May 29, with a photo of her newborn's itty bitty foot. "When 2 become 3..." she captioned the snap. "Welcome Sebastian Piers Williams — aka Baz! Mom, Dad, and Baby are happy, healthy and totally in love!" A quick scroll through Ferrera's Instagram reveals that she prefers to keep photos of her son's face private. With that said, Ferrera has shared a bit about her parenting experience over the past year.

In October 2018, the new mom opened up with Health magazine about pregnancy and motherhood — along with how these experiences have changed her for the better. "Every step of the way, everybody tells you what it's going to be like and how you're going to feel," she told the publication. "I really think that is so harmful to so many of us. I decided early on that I wasn't going to expect my experience to be what other people told me it would be like — good or bad."

As for pregnancy, she explained it was an extremely positive time in her life. "I felt really powerful and healthy," Ferrera told Health. "You create life. I found so much power in that." She went on to share that she didn't end up working out as much as she thought she would while pregnant. (Which, same.) "I had so much on my plate and something had to give," she said.

Ferrera went on articulate perfectly something I think many moms struggle with: Remembering to cut herself some slack. "I think that's been one of the mantras for me in all of motherhood — to try and not be so hard on myself, she told Health. "Which is a challenge because, like so many women, I demand so much more of myself than I would ever demand of someone else." A. Freaking. Men.

Busy Philipps caught up with Ferrera earlier this month, during which the actress shared her thoughts on public breastfeeding. Apparently, the new mom took her 6-week-old son to the Met —mainly to just get out of her New York apartment for a little while. When Ferrera started nursing her hungry little guy in the cafeteria, she immediately noticed strangers giving her "all these looks," as she put it. "I just thought, 'Oh, people think new moms and breastfeeding moms and babies shouldn't be in public.' Like we should lock ourselves away and like, 'You don't belong here.' And I'm like, 'This is insane.' So I just whipped it out wherever I wanted to." Ferrera continued:

I didn't struggle with it because I was just like, 'Forget it, I'll do what I want where I want.' Because I think our bodies are amazing, and I think women are amazing. Never mind not being ashamed of what we are and what we're capable of. But let's be celebrated. Let's start changing this bullsh*t culture.

Clearly, America Ferrera is paving her own way as a mom. She's doing motherhood her own way, and she doesn't care what anyone else thinks about it. But if you ask me, she's totally killing it.