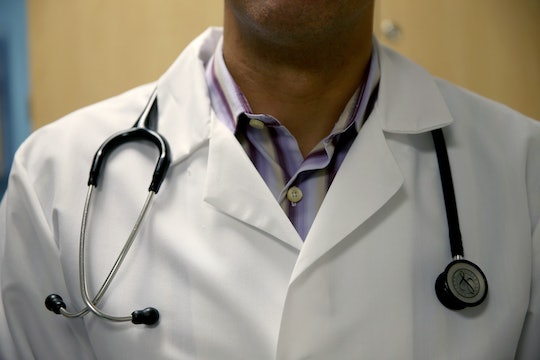 On Thursday, the House voted to break up aspects of the Affordable Care Act and replace the nation's health care system with the American Health Care Act instead. Before the vote, several physician groups as well as patient-advocacy groups spoke out against the AHCA. Now, following it's passing, the American Academy of Pediatrics has spoken out against the AHCA because it's "bad policy for children and dangerous policy for our country."

Although President Donald Trump is confident the bill will pass the Senate, CNN reported that it faces challenges between conservative and moderate Republicans there, so it's headed for an uphill battle during the next step of the process. The AAP has now urged senators to reject the bill; the organization opposed it as it was originally drafted back in March as well, according to Business Insider, so its position has not changed. The AAP was also one of six physician groups that sent a letter to Congress in April in opposition to the bill, so it is no stranger to advocating against the AHCA in this manner.

Instead, the Academy has asked Senators to "support health care policies that put children and families first." Because it clearly feels that the AHCA doesn't do that as it stands.

The statement made by the AAP opposing the AHCA began by noting the 217-213 narrow vote, and stated that it is "dangerous policy precedent" The AAP statement, made by Fernando Stein, MD, FAAP, the president of the group, said:

The American Health Care Act (AHCA) passed today by a vote of 217-213 in the U.S. House of Representatives, putting into motion a dangerous policy precedent and clearing the first hurdle to reversing the tremendous progress we've made in children's health care coverage. As the U.S. Senate considers this bill, pediatricians urge legislators to start over and find a new way forward.

The rate of children's health coverage in our country is at a historic high of 95 percent; the AHCA would not only halt this progress, it would tear it down. By dismantling Medicaid through capped funding and the elimination of the Medicaid expansion, those who will suffer the most are those who need health care the most, including the 37 million children across the country who rely on the program. Medicaid works for these children, including those with special health care needs and those from low-income families – they are more likely to get check-ups, miss less school, graduate and enter the workforce than their uninsured peers.

The bill also allows insurers to go back to putting annual and lifetime limits on coverage, meaning that a premature baby on private insurance could exceed her lifetime limit on coverage before she even leaves the hospital. In addition, the bill allows insurance companies to refuse to cover those with pre-existing conditions, or charge them more for coverage, meaning that conditions ranging from asthma to pregnancy to cystic fibrosis could completely devastate a family financially and leave those who need care unable to access it.

AHCA is bad policy for children and dangerous policy for our country, and the American Academy of Pediatrics will continue to speak out against it. We urge U.S. senators to reject AHCA and instead support health care policies that put children and families first.

The physicians and advocates made sure to include some important statistics in their statement, like the fact that the children's health coverage rate in the United States is "at a historic high of 95 percent." The Georgetown University Health Policy institute reported that from 2013-2015, children’s uninsured levels had the largest two-year decline on record — and that that decline aligned with the implementation of many of the provisions of the ACA.

The AAP statement laid out specific concerns with the bill, such as putting lifetime limits on coverage and the possibility that insurance companies could refuse to cover people with pre-existing conditions under the AHCA. With annual or lifetime limits, the Academy explained that "a premature baby on private insurance could exceed her lifetime limit on coverage before she even leaves the hospital." This would have an obviously detrimental effect on vulnerable children.

The doctors and advocates also noted in the statement that, under the bill, insurance companies could deny coverage to those with pre-existing conditions, such as asthma, pregnancy, or cystic fibrosis, or charge them more for coverage. This, the Academy stated, would leave people who desperately need care without a way to access it. Kids are, of course, affected by medical conditions such as asthma and cystic fibrosis, through no fault of their own. And the AAP seemed to want to make it clear that it opposes any bill that would limit coverage for those children.

The AAP concluded its statement with a strong message about the AHCA and health care policy. It's clear that it wants the Senate to oppose the bill as a matter of it being bad policy for kids and families, and there are ways for anyone to urge their senators to do just that.

To contact your representative(s) before the Senate vote on the AHCA, which is not yet scheduled but is expected to be up for debate soon, find your senator's contact information here.