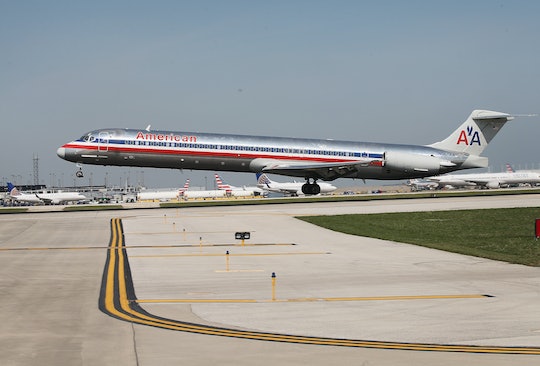 After an unsettling video of a crying mother surfaced on social media on Friday, American Airlines has reportedly suspended the flight attendant who was seen in an intense confrontation with a disgruntled passenger at the front of the aircraft. The airline has since issued an apology after the nearly three-minute long video showed a heated encounter that reportedly happened after the airline employee forcibly removed a mother’s stroller from the airplane, allegedly hitting her in the process and narrowly missing her baby she was holding.

"We have seen the video and have already started an investigation to obtain the facts. What we see on this video does not reflect our values or how we care for our customers," American Airlines spokesperson Leslie Scott told Romper in a statement. "We are deeply sorry for the pain we have caused this passenger and her family and to any other customers affected by the incident."

The video in question was posted by Surain Adyanthaya, a passenger of the flight from San Francisco to Dallas on April 21, shared the viral video on Facebook, showing the woman crying and asking the flight attendant to give her back the stroller and an exchange with a male passenger who came to the woman's defense.

"Hey, bud? Hey, bud? You do that to me and I’ll knock you flat," the male passenger said to the employee.

The flight crew intervenes and the pilot appears to attempt to calm down the flight attendant.

The statement added that the woman, who ABC News reported was from Argentina and traveling with her two children, opted to take another flight and the airline is "making sure all of her family's needs are being met while she is in our care" and upgraded them to first class for the remainder of their international trip.

"The actions of our team member captured here do not appear to reflect patience or empathy, two values necessary for customer care," the statement continued. "In short, we are disappointed by these actions. The American team member has been removed from duty while we immediately investigate this incident."

Although the woman was reportedly able to get the stroller on the flight, ABC News reported that the woman passenger brought a double-wide stroller onto a single-aisle plane and "tried to jam the stroller down the plane aisle." Per the airlines' rules, passengers traveling with children say strollers should be checked at the gate.

The video has been viewed more than 3 million times by Saturday evening and more accounts from passengers on the flight have been circulating on social media, which have added more context to this dispute but most agree that the employee should not have become confrontational.

The controversy comes nearly two weeks after a man was violently dragged off a United Airlines flight, who reportedly suffered a broken nose, concussion, and lost two front teeth. This intense confrontation that left a mother in tears has ignited the discussion yet again about how airlines treat their ticketed passengers.