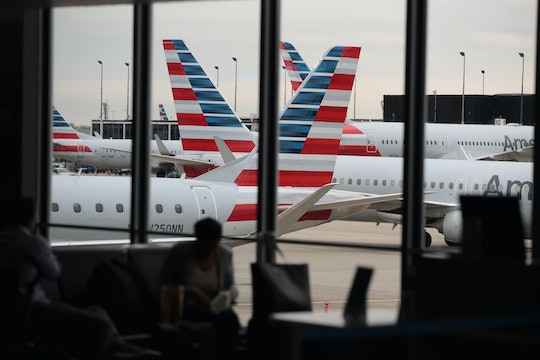 American Airlines Has A New Protocol For Passengers With Allergies

When it comes to allergies, particularly those that can have devastating if not lethal effects, every possible precaution matters. Many parents of kids who struggle with common allergies, like tree nuts or shellfish, understand the stress of navigating a world that was not designed for any toddler whose diet isn't primarily based on peanut butter and jelly sandwiches. But in an effort to help ensure the health and safety of everyone using public transportation, American Airlines will soon allow early boarding for passengers with peanut allergies so that they can wipe down the seats and other surfaces prior to taking off.

On Nov. 8, American Airlines passed a new regulation that ensures any passenger with an allergy can board the plane first, to ensure that all surfaces near them can be adequately cleaned, TODAY reported on Thursday.

If there are two things everyone knows to be true about airplane travel it's this: snack-sized peanut bags are a staple, and the amount of space provided — particularly during boarding and getting off the plane — is not only small, but often tense. Those who are traveling long distances are typically pretty anxious to get off the plane, and the combination can be really stressful for parents who might need some extra time to ensure their seats aren't contaminated. That's where this policy comes in.

The regulation is reportedly in response to a complaint filed by Food Allergy & Research Education, a non-profit organization that advocates for the safety of those with allergies, as TODAY reported.

The group claimed that not allowing passengers to board early to ensure their space is clean violates their legal rights. Though American Airlines initially rejected the claim, the airline eventually came out with a new policy to be more accommodating to those with allergies, or are the parent/caretaker of someone who does.

"Customers with nut allergies who would like to board flights early to wipe down surfaces may ask to do so at the gate,'' an American Airlines spokesman told TODAY. "Though we do not serve peanuts in flight, we can't guarantee our customers won't be exposed to peanuts or other tree nuts during their trip... We strongly encourage those with allergies to take all necessary medical precautions before flying."

This isn't the first airline to take such precautions, either. As CNN reported in July, Southwest stopped serving peanuts altogether due to allergy concerns.

And experts agree with the new protocol. Dr. Purvi Parikh, an allergist and immunologist at the Allergy & Asthma Network tells Romper that indeed, wiping down surfaces with soap and water can reduce potential allergens. But, of course, removing the snack altogether would be best.

Parikh went on to explain that allergies are on the rise, and that can partially be attributed to the "hygiene hypothesis." As she explained to Romper:

Living in cites and industrialized areas are causing us to not be exposed to the good bacteria that is protective against allergies. Also, eating junk food and processed food is disrupting the microbiome in our stomach that also protects us from allergies. Furthermore, over use of disinfectants, hand sanitizers, etc. also disrupts that good, protective bacteria.

If it seems like many people are more hyper-conscious of potential food allergies — whether that be in what lunch items parents are allowed to send their children to school with, not sharing cupcakes in class on a student's birthday, or keeping certain snacks out of areas in which many children participate in extracurricular activities — the heightened sensitivity comes with cause. The New York Times reported in 2014 that peanut allergies are on the rise, and at the time, it has risen three fold since 2010. And that was four years ago.

Now, according to research from Food Allergy Research & Education — the same group that requested the airline procedures — about 15 million Americans have food allergies in total, and that includes 5.9 million children under the age of 18. "That's 1 in 13 children, or roughly two in every classroom," the group explains on its site. "About 30 percent of children with food allergies are allergic to more than one food."

With all this said, it's clear why it's so important to be extra careful about ensuring that public spaces are safe for everyone — especially kids, and especially in the context of potentially being 30,000 feet in the air when an allergic reaction could occur. Better safe than sorry.