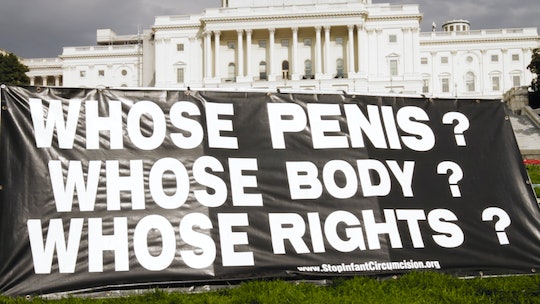 'American Circumcision' Takes An In-Depth Look At The Controversial Topic

Few topics of parenthood are more divisive than the decision to circumcise male infants or not. Those in favor point to religion, health, and cultural norms as motivating factors, while those opposed argue that consent should be considered. Despite the debate, many believe that circumcision needs to be discussed more openly. American Circumcision is the documentary that will finally get that much needed conversation started.

American Circumcision is described on the official film website as "an award winning feature-length documentary" that delves into the modern circumcision debate, exploring the growing Intactivist movement of protestors, which says that all human beings should have the right to make their own choices about their bodies. It is set to be released on August 31 and will be available on a variety of streaming platforms including iTunes, Amazon, Google Play, and more.

In a press statement, Brendon Marotta, Director of American Circumcision explained that he set out to inform the public about the reality of circumcision and correct misconceptions:

When you begin discussing this issue, you’ll find that people have false beliefs about even the most basic facts. People will try to claim that circumcision does not involve cutting or removing tissue, that there isn’t a specially designed board children are strapped down to when this is done to them, or that circumcision hasn’t often been done without anesthetic.

While the American media has discussed circumcision from time to time, the procedure is not described accurately. Marotta said that it is erroneously viewed as a one time decision made by parents:

The truth is it’s more like dropping a stone in a pond — a decision that ripples through that man’s life — through his sexuality, his body, his self image, his relationships, his feelings, his culture, religious institutions, medical institutions, and even through the laws of his country — for the rest of his life.

But what exactly leads parents to make the decision to circumcise? In a 2016 essay published in Pediatrics, Dr. Andrew L. Freedman explains that while the American Academy of Pediatrics has previously hailed circumcision as a medically smart move, in much of the world, it is not primarily a medical decision:

Most circumcisions are done due to religious and cultural tradition. In the West, although parents may use the conflicting medical literature to buttress their own beliefs and desires, for the most part parents choose what they want for a wide variety of non-medical reasons.

While consent is a real issue, parents are the ones who have to make the decision in the moment to circumcise or not. While social media has made the topic significantly less taboo, according to the Huffington Post, finding information free of bias is nearly impossible. This lack of definitive answers to important questions leaves parents in the lurch — even the AAP describes health benefits that are "not great enough to warrant a recommendation for all males to undergo the procedure," but are "significant enough that it should be available to all, and that it should be covered by insurance." according to The New York Times. So, where does that leave parents?

This is where American Circumcision comes in. In his statement, Marotta went on to explain that "people are naturally repulsed by what [circumcision] does to children" and many "find it nearly impossible to integrate the truth about circumcision into their day to day life." It is his hope that American Circumcision will confront the many misconceptions, fill in the many blanks, and inspire people to acknowledge the pain behind the procedure and embrace the solutions to the problems raised by it.