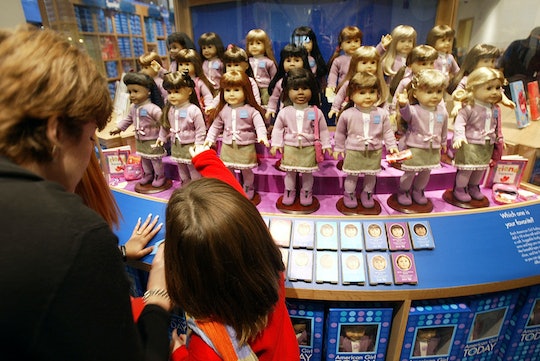 Who's Melody Ellison? That's American Girl's new historical doll, created in honor of Black History Month. Ellison is an African-American fictional character who grew up in Detroit during the civil rights movement. The company announced the new doll on Monday's edition of CBS This Morning. Although it seems Americans can't agree on much these days, hopefully we can agree on one thing: The American Girl civil rights doll is such an important statement for young girls everywhere.

Ellison will be the company's third African-American doll. The doll will debut this summer as part of American Girl's BeForever collection in celebration of the company's 30th anniversary (I mean, I don't know about you, but I remember when I got my first American Girl doll ... and yes, it's been that long). And if you remember your first doll, you're in good company. Since launching in 1986, the company has sold more than 29 million dolls. According to the American Girl article announcing the new Melody doll, the new character is 9 years old and is growing up in Detroit in the mid-1960s. She has a penchent for Motown and is directly inspired by Martin Luther King, Jr.'s message. Denise Lewis Patrick, the author of the Melody stories, said as the character evolves, she has "an understanding of fairness and equality."

Because February is Black History Month, your daughter may be learning about Martin Luther King, Jr., and the Civil Rights movement in school. But even in our own changing times, civil rights issues and the social climate of the 1960s may be difficult for her to fully understand. That is why we are so proud to introduce our compelling new BeForever character, Melody, whose story reflects the changing face and history of the nation during that important era.

Melody will join Addy, Kaya, and Josefina as the three non-white dolls in the current historical BeForever line. In the past, the collection has included Cecile Rey, an African-American from a well-to-do family in New Orleans, and Ivy Ling, a Chinese American girl. Neither is in production currently. This move is particularly big for the American Girl company since for seventeen years, the company's Addy doll, a runaway slave, was the only black historical doll. Now, the new Melody doll gives girls and boys of color another option when choosing a doll that gives them a window into the country's past and the African-American experience.

The neat thing about the new doll is Melody is more than just plastic — her character has a story to tell, an important one. And the American Girl company went to great lengths to get it right. When designing the doll and her story, the company formed a six-panel advisory board, including the late civil rights activist Julian Bond. The era during which Melody grows up is arguably one of the most important in African-American history. That said, some would argue that the public needs to see more modern stories for African-American dolls. While that is certainly true, I think we can all be happy we are one small step closer to having equal options for both white boys and girls and those of color to see themselves in their dolls and toys.

More Like This
Mom On TikTok Asks Daughters Why They Want To Be Boys & Same, Girls, Same
22 Super Sweet Valentine's Day Poems For Kids
35 Children’s Books Starring Black Characters
14 Recipes For Sick Kids When Everyone's Tired Of Canned Soup & Crackers
What Parents Are Talking About — Delivered Straight To Your Inbox