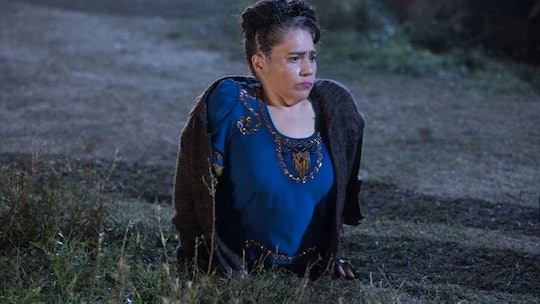 Another American Horror Story: Freak Show actor has passed away. Actress Rose Siggins, aka Freak Show's Legless Suzi, died Dec. 12 in a Denver hospital from complications resulting from kidney stone surgery. Variety reports that the actress suffered from sacral agenesis, which causes chronic kidney and pancreas problems. Siggins, who is best remembered for playing Legless Suzi on AHS, is survived by two children, Luke and Shelby. A GoFundMe campaign was set up to help pay for Siggins' medical expenses. Now, all proceeds from that campaign will go towards the care of Luke and Shelby.

TMZ, who broke the story of the actress' passing, reports that Siggins contracted an infection that spread through her body and ultimately became fatal. She is the second actor from the Freak Show season of American Horror Story to die this year. In February, actor Ben Woolf, aka Meep, was hit by a car and died.

Siggins appeared in the 2010 documentary Born Different: Unbelievable Medical Conditions, as well as the 2014 documentary American Horror Story FreakShow: Extra-Ordinary-Artists, which focused on the lives of the so-called "freaks" and their inspirational backgrounds. Because of Siggins' kidney condition, doctors decided to amputate her legs when she was two years old. The alternative, she was told, was to go blind and spend a lifetime in a wheelchair.

She also discussed her shock when she became pregnant with her first child, Luke. Siggins talked about how she developed a transverse belly while pregnant. Both of her children were born without complications.

Fans of Siggins are understandably saddened by the news.

Many are spreading the word about her GoFundMe campaign.

And everyone agrees that Siggins has left quite a legacy with her optimism and fame in spite of the disease. Said Siggins in American Horror Story FreakShow: Extra-Ordinary-Artists, "I kind of like the way I am. I wouldn't change it. I couldn't imagine myself being what everybody calls normal; because this is my normal."