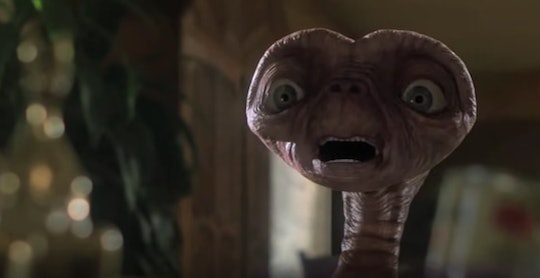 Trump's VOICE Line Is Getting Calls About Aliens

On Wednesday, the Trump administration established the Victims of Immigration Crime Engagement Office, or VOICE, a new office intended to "assist victims of crimes committed by criminal aliens," according to a statement released by U.S. Immigration and Customs Enforcement. The office's main offering seems to be a toll-free hotline to support victims of crimes carried out by undocumented immigrants, or "criminal aliens," as the Department of Homeland Security has controversially called them. The hotline has received a lot of calls so far, but not the kind they were probably expecting: instead, Americans are calling Trump's immigrant hotline to report ET, Superman, and other actual aliens.

The VOICE office and hotline was established as part of President Trump's executive order on immigration, which instructed the Department of Homeland Security to create an office supporting victims of undocumented immigrants' crimes. "All crime is terrible, but these victims are unique – and too often ignored," Homeland Security Secretary John F. Kelly said in a statement on Wednesday. "They are casualties of crimes that should never have taken place – because the people who victimized them often times should not have been in the country in the first place."

So a prank began: if Homeland Security wanted to know what "criminal aliens" were up to, why not tell them?

The problematic thing about Trump's immigration crime hotline isn't only that immigrants are called "aliens" — a term that many have campaigned against for years, calling its use derogatory and negative — it's that its mere existence twists reality to demonize undocumented immigrants. In reality, according to The New York Times, multiple studies have shown that immigrants are actually less likely to commit crimes than people born in the United States. According to the American Immigration Council, higher levels of immigration are actually correlated with lower levels of crime. And a state-level support program already exists for crime victims — and nowhere in it does it exclude victims of crimes committed by undocumented immigrants, making it unclear why a hotline made specifically for those victims is necessary.

"Singling out certain people based solely on their immigration status sets a dangerous new direction for our society," Mark Hetfield, president of HIAS, a Jewish refugee aid group, said in a statement on Thursday. He continued:

This new, taxpayer-funded government office only serves to marginalize minority communities, demonize newcomers and divide us. Throughout history, governments have misused national criminal reporting systems as a platform for scapegoating and propaganda.

Once people started calling in with stories about ET and UFOs, the ICE tried to clarify a few things on social media. The hotline isn't a place for people to report crimes; instead, it's a place for victims to receive support, "help victims track the immigration custody status of illegal alien perpetrators of crime," and help individuals gain "additional information" about the criminal and immigration history of the criminals they reported. Not surprisingly, the ICE is not too happy about all of the extraterrestrial reports they've been receiving instead.

"Our mission is clear, that is to acknowledge the exceptional damage accused by criminal illegal aliens and to support the victims of these preventable crimes," Kelly said in a statement on Wednesday. "Victims of crimes by illegal aliens and their families have suffered tremendously and this is your resource. It's for them."

This group’s cheap publicity stunt is beyond the pale of legitimate public discourse. Their actions seek to obstruct and do harm to crime victims; that’s objectively despicable regardless of one’s views on immigration policy.

As stories of the pranks spread, however, it seems like more people on social media are encouraging others to do the same. It seems people find ET and Superman a little less despicable than they do a hotline targeting minorities.