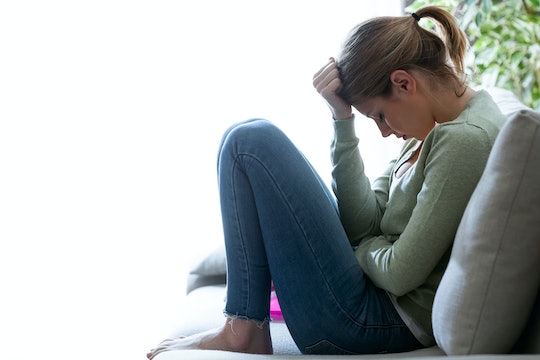 Americans Are Feeling More Anxious Than They Did A Year Ago, Survey Says, & Here's Why

If you're feeling evermore anxious these days, you're not alone. In fact, Americans are feeling more anxious than they did a year ago, a survey from the American Psychiatric Association found. And it's no small number of Americans either. Thirty-nine percent of them reported feeling more anxious now than they did a year ago, which is more than double the numbers of Americans who are experiencing less anxiety. This means that there's been a 5-point increase in the country's "national anxiety score," from 46 out of 100 in 2017 to 51 out of 100 in 2018, according to the Los Angeles Times.

The findings are the results of comparing the answers, given in March of this year, of a nationally representative sample of 1,004 adults with the results of a similar survey that was conducted in April 2017, according to the LA Times. And those comparisons suggested that America, as a whole, is an evermore anxious country for a number of reasons.

To be clear, anxiety disorders are defined by "excessive fear, restlessness, and muscle tension," and they can be debilitating and disabling, according to The Conversation. Anxiety disorders are actually the most common mental illness in the United States, according to the Anxiety and Depression Association of America (ADAA): 40 million Americans over the age of 18 are affected by it, which is roughly 18 percent of the nation’s population, according to Elements Behavioral Health.

The difference between worry and anxiety depends on how much time someone spends worrying or obsessing over things, according to a Johns Hopkins Health Alert.

And anxiety disproportionately affects women — with the exception of PTSD, women are twice as likely to suffer from anxiety disorders as men are, according to the Anxiety and Depression Association of America. That's thanks to a variety of reasons, like differences in brain chemistry, hormone fluctuations, and reproductive events across a woman's life span. It could also be because women respond to events differently, as they're more prone to stress and tend to ruminate about their stressors more so than men, The Conversation reported.

And now, atop of all of that, Americans in general are citing worries about safety, finances, health, politics, and relationships as added stressors that fuel their anxiety. They were predominantly worried about their safety, with 36 percent of Americans describing themselves as extremely anxious about "keeping myself or my family safe," according to the LA Times. Another 31 percent said they were "somewhat anxious" about safety.

Anxiety was up among both men and women in all racial and ethnic groups and of all ages, according to the LA Times. But the survey found that the most anxious Americans are millennials, even though, in the past year, anxiety increased more for Baby Boomers than for millennials or for members of Generation X. Perhaps it's partly because of the combination of social media disseminating more and more political news and burgeoning student loan debt, according to The Hearty Soul and Big Inc.

"Increased stress and anxiety can significantly impact many aspects of people's lives," Dr. Anita Everett, president of the APA said in a statement, the LA Times reported. As for reducing stress, her prescription includes regular exercise, relaxation, healthy eating and ample time with friends and family.

More Like This
6 Mindfulness Activities For Kids
A New Survey Shows 74% Of Women Would Drain Their Savings On Maternity Leave
What Parents Need To Know About Hulu's Predator Prequel Prey
10 Cozy, Romantic, & Drama-Filled Shows To Watch If You Love 'Virgin River'