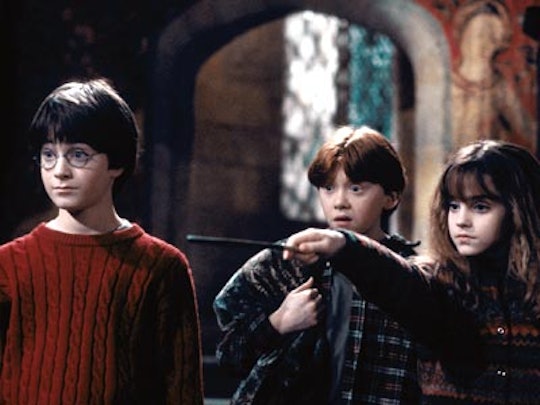 Americans Have A Different Word For Muggle, Says JK Rowling, But Here's To Hoping These Other Words From The Potterverse Don't Get An Americanized Equivalent

Attention American Harry Potter friends: J.K. Rowling has made a big announcement, and you may want to sit down! According to Rowling, the term "Muggle” — which is used to describe individuals who do not have magical powers — isn't used in the United States. Let me repeat that: There is an American word for “Muggle,” and on Wednesday, the Harry Potter author told Entertainment Weekly exactly what that word is: “No-Maj” (an abbreviation for “no magic”).

Wait, what? But, but...Rowling, you are throwing my head through a loop right now! What are use Potter-obsessed Americans supposed to do? I feel like our entire relationship has been based on a lie!

OK, maybe I am being a bit dramatic, but reviews are mixed: Some fans feel “No-Maj” sounds weird, others have actually refused to acknowledge its existence, and still others like its easy, “lowkey” approach. But here’s the thing: I understand why Rowling chose to do this. There are a plethora of words in the English language which vary from American to British, and while I would have preferred an alternate “American” spelling — like, couldn't we have just dropped a “g” and called it a day — it is what it is. That said, if you are listening to me J.K., please, please don’t change these 11 other words from the Potter series:

I’ve read about it, I’ve tasted it, and with a super-sweet taste and creamy finish I can’t imagine calling it anything else. (Hell, with this one I’m not budging!)

Sold at Honeydukes, this candy — made from sherbert and Billywig stings (or so they say) — makes those who consume it float a few inches above the ground! Why change their name when this sweet speaks for itself.

Bludgers, Quaffles, Quidditch, And The Snitch

Can you even imagine Quidditch being called anything else? I mean, yes, America is the only country which refers to football (or futbal) as soccer, but just because we can doesn’t mean we should.

I have no explanation for why I love this one, I just do. (It makes me giggle.)

While I am not a proponent of discrimination — even in fictional worlds — this word is perfect because it conveys just how derogatory the term is. Mudbloods are those witches or wizards born from Muggles or, uh, “No-Maj” parents, and the phrasing implies they are dirty, filthy, unworthy messes.

A beautiful name for a beautiful, winged and — yes — half-dead (undead?) creature.

An omen of death, the very mention of the word sends shivers down my spine.