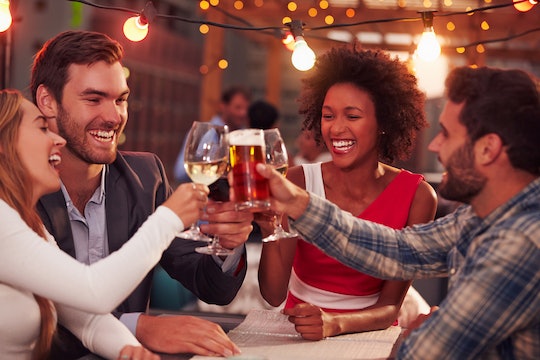 If there's anything Taco Bell has taught me in life, it's that a "fourth meal" after a night out with the girls is always a good idea. And it looks like I'm not the only one who is willing to spend my money that way. A recent study found that Americans spent billions while drunk shopping last year, and over half of the purchases were, you guessed it, on food.

The study, conducted annually by the personal finance website Finder.com, reported that Americans spent a total of $39.4 billion during spontaneous shopping sprees while under the influence of alcohol, as Fortune reported.

What's more, the total number of purchases is up by $9 billion, but the percentages of Americans who reported spending while intoxicated is down 20 percent since the survey was conducted the year before. Those combined figures suggest those who are spending money while tipsy or drunk are spending more money per person than before, according to Finder.com. In January of 2017, the average amount spent while under the influence was just $206, jumping to $447.57 in 2018 and to $736 in 2019.

As Delish reported, 26 percent of participants in the survey stated that they had made a purchase after having a few drinks — or more. Those numbers boil down to roughly 53.4 million drunk people shelling out an average of $736 a year on unplanned purchases.

These numbers vary greatly by demographic with men spending more than women: an average $870 per year, as well as being more likely to buy things while drunk: 56 percent of men compared to 44 percent of women. And Millennials are spending the most of any age group examined — averaging $1,047 per year compared to $466 for baby boomers and $469 for Generation X, according to Fortune.

So that's who is spending, but what are Americans buying while under the influence of alcohol? As you might have guessed, it is food, according to Delish. A total of 52.06 percent of drunk shoppers admitting to buying something to eat after drinking alcohol. Both men and women listed food as their most common purchase — 48.55 percent of men and 57.65 percent of women, according to the research. Foods is followed by shoes and clothing — at 43.22 percent and cigarettes 30.26 percent, according to Finder.com. And 27.04 percent of women also reported drunkenly gambling their money.

If you're concerned that you may be one of the billions of Americans spending arguably too much money after having a bit to drink, there are steps you can take to avoid drunk shopping. According to U.S. News & World Report, online shopping is a common method of making drunk purchases and a potential explanation for the recent rise in money spent this way. Without the need to physically go to brick-and-mortar stores and the advent of one-click shopping apps like Amazon, shopping while buzzed is easier than ever.

To fight the urge to "drink and Prime," Wise Bread recommended deactivating notifications via email and uninstalling shopping apps, at least prior to consuming alcohol. There are even apps and browser extensions that can prevent you from shopping while drunk, if you're into that sort of thing. According to The Standard, DrnkPay is an app that links credit and debit cards to a breathalyzer or other blood alcohol content monitoring systems and limits purchases if you've had too much. You can include exceptions and emergency contingencies, such as ordering an Uber to make the app work for you, The Standard reported.

Additionally, you can remove your saved payment information from apps, Michelle Madhok, online shopping expert and founder of deals site SheFinds.com, told U.S. News & World Report. "You want to make the barriers to entry harder," she said. "If you have to get up and go get your wallet, then you'll say, 'Forget it.'"

Now, I'm not here to shame anyone for buying a pizza to follow a few beers. But if that kind of spending is becoming a problem for you, consider making it a bit harder to do. After all, you don't really need those 20 candles you bought after a bottle — or two — of rosé; at least that's what I keep telling myself.

More Like This
Amid A Nationwide Shortage, Moms Are Using Social Media To Find Each Other Formula
Ashley Graham Reveals She Lost “Liters Of Blood” After Twins’ Home Birth
20 Amazing Shows With LGBTQ+ Characters To Watch With Your Kids
13 Celebrity Parents Who Also Raise Chickens At Home