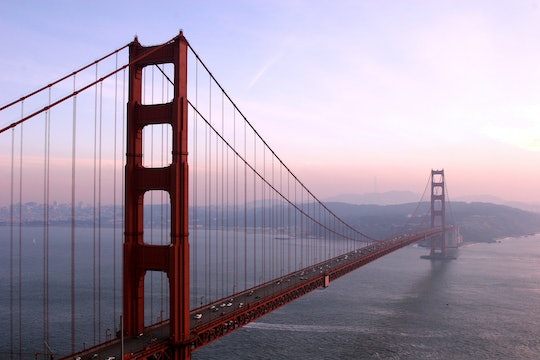 America's Bridges Are Crumbling & You Should Definitely Be Concerned

While we all bicker over bathroom bills and whether or not Donald Trump's hair is real, America's bridges are crumbling and the rest of our infrastructure is in need of lots of love and care. We should all add this to the top of the list of questions to ask the candidates in the general election, because what makes America really great is that fact that we have tunnels and bridges and interstate highways. And we're letting them just go to waste.

The American Society of Civil Engineers has a report card that it refreshes every four years. And according to recent reports, the news this time around isn't good. In 2013, our infrastructure got a straight up D+. I didn't even know you could give a "D" grade a plus (what does that even mean?), but that's still very close to failing. If this was European Literature 101 in college, we would all be crawling to the professor's office hours to beg for some extra credit writing assignments so we could advance to the next level.

Schools, dams, ports, levees, bridges, roads, and inland waterways all reportedly brought our collective GPA down. Apparently, we're sort of good at managing solid waste and our parks (thanks to all those Leslie Knopes out there). But that's not all we should be paying attention to. We need to get our you-know-whats into gear.

According to CNN, even former Secretary of Transportation Ray LaHood said that America is like a "third world country" when it comes to infrastructure. And it all comes down to budgeting. In the past ten years, federal funding on infrastructure has actually gone down by 9 percent. It's also tied up in politics and bureaucracy. Environmental regulations, funding, and the fact that multiple agencies are technically overseeing various projects just leads to pretty much nothing getting done.

The ASCE says that we would need about $3.6 trillion overall just to do upkeep on crumbling roads and bridges as it is. That doesn't even take into account the need for new projects and innovation when it comes to not just fixing bridges and tunnels, but making them better (and possibly cheaper and easier to maintain).

The 2016 presidential candidates know this of course. But they don't really talk about it as much as they do about other things — like foreign policy, health care, and all the sexier, just as important stuff. But infrastructure is something most of them brush past on the way to talking about something else. Even Donald Trump, who actually has made a point to talk about our useless national rail system, hasn't made it a key point in his campaign. Former Secretary of State Hillary Clinton wants to throw $250 billion at the problem. That's not anywhere near enough.

America has always been great, but if we want it to be even better (and create some jobs), tackling bridges and roads should be one of the country's first steps. And if that doesn't scare you into writing your representative, consider this: We have nets stopping concrete from falling on cars over highways. Nets. That should be unacceptable to everyone, like having lots of crackers but no cheese at a party. America needs to clean up its house.