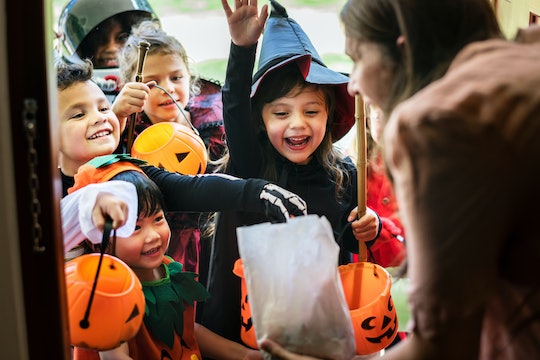 This Delicious Classic Is America's Most Popular Halloween Candy

Forget the parties and the costumes because there's no doubt about it: Halloween is all about the candy. Whether it's fruit flavored, caramel-filled, sour, or chewy, there are hundreds of sweet treats to choose from this time of year. And a new study shows there's no debate about which treat ranks highest for Americans. So which sugary morsel came out on top? As one might expect, America's favorite Halloween candy is obviously delicious and a true classic.

A recent study by Monmouth University found that the irresistible combo of chocolate and peanut butter won Reese Peanut Butter Cups the top title, according to CNN. The study surveyed 1,161 adults, and 36% said the orange-wrapped treat was their favorite Halloween candy. Snickers came in second with 18%, and M&Ms rounded out the top three with 11%. Hershey bars, Skittles, Starburst, and Tootsie Pops were also popular, but received only 6% or less of the vote.

A full list of America's top favorite Halloween candies, according to the poll:

That all being said, the popularity of a candy might depend on where you live. Although the top three candies remained the same throughout the United States, results revealed that you are more likely to favor Snickers if you live in the West or the Southwest/Mountain region, according to the study.

As for reactions on Twitter? Well, people had mixed feelings about the survey.

Some love Reese's cups this time of year because the treats take on a new and improved shape to match the holiday. "In the pumpkin shape the ratio or filling to chocolate is perfection!" said one Twitter user.

Others had questions about the validity of the poll. "Great advertisement to get the name in the minds of people before that holiday. But who are those ‘researchers’ and what are the metrics on this poll?" said one Twitter commenter.

But there was one odd ball candy that researchers were surprised made the list at all. "Candy corn even making the list may surprise some people, but it is one of the top-selling Halloween candies in the country," Patrick Murray, director of the independent Monmouth University Polling Institute, said in a statement, according to CNN. "

Murray continued, "We don't know if it's one of the top-eaten candies, but it does have a fan base. And candy corn make great fake teeth to creep out your parents with."

As always, candy corn is the one candy that people either love or hate, with one Twitter user saying, "If you eat candy corn, I'm just going to assume you eat crayons and candles. Yuck!" And I'm sure there are a few people who agree with this sentiment.

Side note: I love candy corn.

When handing out candy to trick-or-treaters this year, remember that chocolate and peanut butter seems to be the winning combination. Just don't be bummer house that gives candy corn because it's not a popular treat in America, apparently. Happy Halloween!