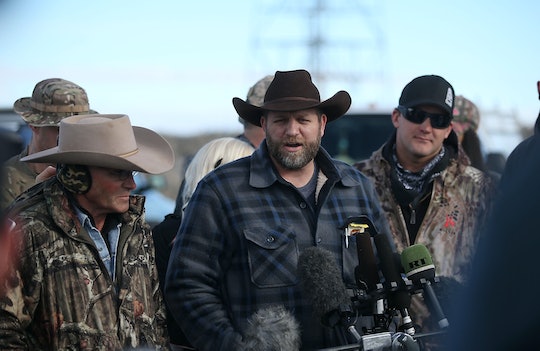 Portland ABC affiliate KATU reported on Tuesday evening that police had arrested Ammon Bundy, leader of an armed occupation at Malheur Wildlife Refuge in Oregon. According to the news outlet, the group was taken into custody after a traffic stop in Harney County allegedly devolved into an exchange of gunfire between police, Bundy, and at least eight more of Bundy's associates. Authorities claimed that the group had been on its way to a meeting in John Day, 70 miles from the occupation area.

According to Oregon Public Broadcasting, both the FBI and Oregon State Troopers were involved in the incident, which occurred along Highway 395, although it was not clear whether authorities or the group in the car had fired first.

Authorities on Tuesday evening said that Bundy had been arrested along with associates Ryan C. Bundy, Brian Cavalier, Shawna Cox and Ryan Waylen Payne. All of the individuals taken into custody were part of a group of armed protestors that had been illegally occupying space on the wildlife refuge since Jan. 2.

Police stated that there had been one fatality and that at least one other individual had been transported to a nearby hospital after sustaining non-life-threatening injuries in the firefight. CNN reported on Tuesday night that the individual killed during the traffic stop had been "the subject of a federal probable cause arrest."

Authorities on Tuesday also stated that a ninth individual related to the armed occupation, 45-year-old Joseph Donald O'Shaughnessy, had been arrested in a separate incident. The AP reported that the 50-mile stretch of highway near the refuge occupation area had been closed off by Tuesday evening.

The long-simmering stand-off between police and protestors began early this year, after a dispute over use of public lands came to a head, with armed militia members breaking into the federal building on the Malheur Wildlife Refuge. At the time, Bundy, the son of well-known Nevada rancher Cliven Bundy, claimed that he and his associates would remain on the land illegally "for as long as it [took]."

"People need to be aware that we've become a system where government is actually claiming and using and defending people's rights, and they are doing that against the people," Bundy told reporters. "We have no intentions of using force upon anyone, [but] if force is used against us, we would defend ourselves."

In a statement on Tuesday, the FBI said that it would not be releasing any additional information about the deceased, "pending identification" by the medical examiner's office.