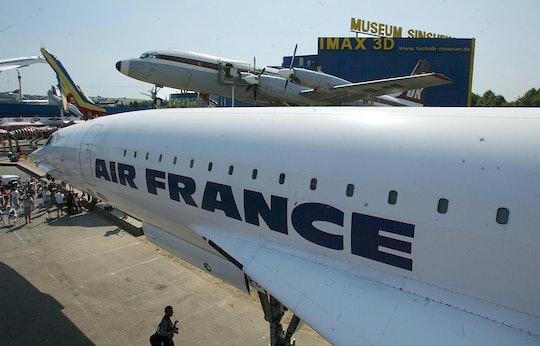 In the wake of Friday’s coordinated terrorist attack in Paris, an Air France Paris-bound flight was grounded at Amsterdam’s Schipol airport Saturday afternoon after a Twitter account named @jihadijohn8 tweeted a threat regarding the flight. The threatening tweet read “Forget #Russia? Wait for what will happen on flight AF1741 from #Amsterdam to #Paris..#ParisAttacks.” The tweets have now been deleted.

Authorities evacuated the plan to investigate. As the UK paper the Express noted, the threat referenced the fate of Metrojet flight 9268 over the Sinai peninsula on Oct. 31. The cause of the Metrojet crash, in which 224 people died, has not yet been determined. ISIS claimed responsibility for that crash, as it did for the attack on Paris Friday night. At least 120 people were killed in the coordinated shootings and suicide bombings in Paris.

A police spokesperson told the Express that they searched Air France flight 1741 for an hour Saturday. Passenger luggage was re-screened. No problems were found aboard the plane, an Air France representative told AFP.

Amsterdam's Schipol airport wasn't the only airport facing a threat Saturday morning possibly related to the Paris attacks. A man at London’s Gatwick Airport was held and the north terminal was evacuated today, too. At around 09:30 GMT, "suspicious actions" by a man were reported. A 41-year-old Frenchman reportedly approached an EasyJet counter with a gun and then threw it into a trash bin when he was challenged. After police apprehended him, they found a second gun strapped to his body. It is still unclear whether he was trying to board the plane. Det. Supt. Nick May told the BBC:

At this time, we are investigating the circumstances of the incident and it is too early to say what the item may be."However, given the events in Paris on Friday evening, there is heightened awareness around any such incident and it is best that we treat the matter in all seriousness.

Travelers at Gatwick's North Terminal of the airport have been evacuated to a nearby hotel. Gatwick officials have warned passengers to allow for extra time as they have closed all roads immediately surrounding the airport.