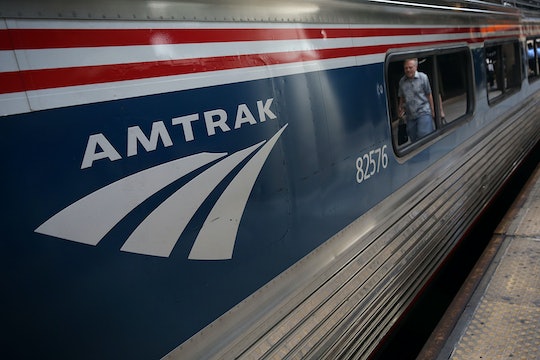 Everything We Know About The Amtrak Train Derailment In Washington State

On Monday, CNN reported that an Amtrak train derailed in Washington state. One of the train's cars is currently dangling over an interstate overpass in an area near Dupont, and multiple people are reported to be injured or dead. Obviously, this is a very scary time for the people involved in the crash, and there are a lot of questions about how this accident occurred.

Update: The Associated press reported Monday afternoon that at least six people were killed in the Amtrak train derailment, but neither the Pierce County Sheriff's Department nor Washington State Trooper Brooke Bova have confirmed that number publicly.

An official in the area, Ed Troyer, released the following statement shortly after the crash, according to NBC News:

There have been multiple casualties as a result of the Amtrak derailment near Tacoma, Washington The casualties include multiple injuries and fatalities.

Today’s tragic incident in Pierce County is a serious and ongoing emergency. Trudi and I are holding in our hearts everyone on board, and are praying for the many injured.

Inslee also advised people to avoid the interstate where the crash happened:

There were 78 passengers and five crew members on board at the time of derailment, which occurred around 7:40 a.m. Pacific Standard Time, according to Amtrak's website. The company also identified the train as the Amtrak Cascades Train 501. The Cascades line has been in operation since 1971, and it services states in the Pacific Northwest.

As for the 501's particular route, it was traveling on a new and faster path from Seattle to Portland, Oregon. Monday marked the new route's first test run, and many commuters were excited to knock 10 minutes off their trip.

Although it's unclear what caused the accident, some suspect a curve in the route might be to blame. The Washington Post reported that the train was approaching a curve when the crash occurred, and it's possible the 501 lost control as it navigated the bend.

Additionally, some people believe high speeds played a role in the event. A passenger on the train, Chris Karnes, suspects the train was traveling at 79 mph at the time of crash, according to The Seattle Times.

Karnes recalled, according to CBS News:

We had just passed the city of DuPont and it seemed like we were going around a curve. And all of a sudden, we felt this rocking and creaking noise, and then all of a sudden it felt like we were heading down a hill, and the next thing that we know, we're being slammed into the front of our seats, and the windows are breaking, and then we stop, and there's water that's gushing out of the top of the train and all the lights go out and people are screaming. The tracks for this line were supposed to be upgraded to be able to handle higher speeds. So, I'm not sure what happened at this juncture.

Of course, people won't know exactly what happened until Amtrak and the National Transportation Safety Board conduct investigations. What is clear, however, is that a lot of people are in distress right now.

Although no fatalities occurred on the interstate below the crash site, many motorists were injured when their vehicles hit the derailed train. Seventy-seven people have been brought to local hospitals, according to CNN, and some passengers and crew members are still trapped on board. It's unclear how many people were killed in the crash, although some reports claim there were six fatalities.

To appropriately deal with the crash, Inslee has declared a state of emergency, and Interstate 5 south bound will be shut down for the rest of the day, according to USA Today.

Although these images can be stressful to see, rest assured that first responders are doing their best to help the crash's victims. A passenger told CBS News:

It felt pretty immediate [for help to arrive]. I’m just feeling so blessed because the people here are so welcoming and helpful. It was really quick. Support came and got us and made sure that we were okay.

And if your loved one was traveling on the train, call (901)-523-9101 for updates and important information. If you're in the Washington area, visit the family reunification center at DuPont City Hall.