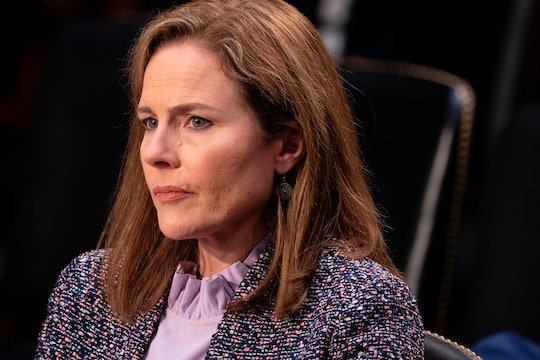 As the Senate's Supreme Court confirmation hearings continue, President Donald Trump's pick to replace the late Supreme Court Justice Ruth Bader Ginsburg has come under increasing scrutiny for her past associations. Most recently, reports that Amy Coney Barrett served on the school board of a collection of private schools that barred children of unmarried couples from attending and defined marriage as being between a man and a woman have raised concerns among critics about how her conservative views may play out on the court.

According to The New York Times, Barrett served as a member of the Trinity School's board of trustees from 2015 to 2017. A number of her seven children are also reported by both the Times and Politico to have attended the school, which details its connection to the People of Praise Christian community on its website under the school's history. Barrett reportedly joined the school board a year after it adopted a policy to "not accept children of unmarried couples," according to the Times.

In a statement to Romper, President Jon Balsbaugh declined to confirm whether or not the schools ever had such a policy in place. Instead, he said Trinity Schools "does not unlawfully discriminate with respect to race, color, gender, national origin, age, disability, or other legally protected classifications under applicable law, with respect to the administration of any of its programs." He further described Trinity School students as hailing from "many traditions or denominations" and noted that "neither families nor students are required to be Christians to attend."

He further directed Romper to a cultural statement crafted in 2019 for Trinity Schools, which noted the school was committed to helping students "establish Christian relationships" rooted in the understanding that marriage is between a man and a woman. "We understand marriage to be a legal and committed relationship between a man and a woman and believe that the only proper place for sexual activity is within these bounds of conjugal love," the statement read. "Outside of marriage so understood, we believe that sexual activity (whether heterosexual or homosexual) is not in keeping with God’s plan for human sexuality."

While Trinity Schools noted that parents are not required to subscribe to these same beliefs, "they should understand that students will encounter it as normative in our Scripture courses, doctrine classes and other courses at Trinity School."

Although Barrett served on Trinity Schools' board, it remains unclear how aware she was of the policy as she has never spoken out about it publicly. While Balsbaugh told the Times the policy was not mentioned in the minutes of the school board meetings Barrett attended, former school staff members told the paper the policy was enforced during the years Barrett served on the board. Former school staff members also told the Times that students with same-sex parents were also barred from admissions.

Barrett also isn't the only member of her family with connections to Trinity School. According to Politico, Barrett's husband, Jesse, once served as an advisor to the school's mock trial team.

Trinity Schools opened its first school in South Bend, Indiana in 1981. Two other schools followed in Eagan, Minnesota, in 1987 and in Falls Church, Virginia, in 1998. According to Politico, Trinity School's South Bend location is considered by some to be the city's "best and most conservative" school for intermediate and high school aged students. Tuition ranges between $13,000 and $14,000, according to the news outlet.

On Tuesday, Barrett also came under scrutiny for using the term "sexual preference" in regards to gay people during her confirmation hearings. As LGBTQ advocacy groups like LAMBDA Legal were quick to point out, the term "sexual preference" — as opposed to sexual orientation — "is used by opponents of equality to suggest that being #LGBTQ is a choice."

When called out for her use of the phrase by Sen. Mazie Hirono during Tuesday's hearing, NPR reported Barrett said she "didn't mean and would never mean to use a term that would cause any offense in the LGBTQ community."

Groups like The Human Rights Campaign have characterized Barrett as "an absolute threat to LGBTQ rights" due to her views on Obergefell v. Hodges and extending Title IX protections to transgender individuals.