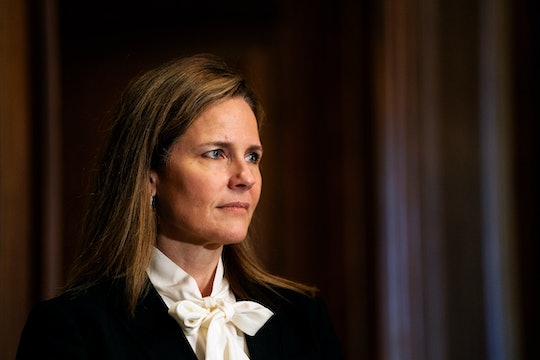 The president's pick to replace the late Ruth Bader Ginsburg on the Supreme Court has once again come under scrutiny after a report from the National Review alleged Amy Coney Barrett once supported an anti-choice group that has argued life begins at fertilization.

As the National Review reported, Barrett signed her name publicly to a St. Joseph County Right to Life newspaper advertisement that ran in The South Bend Tribune in 2006. Based in South Bend, a city that sits in a region of Indiana often refereed to as Michiana, St. Joseph County Right to Life is an anti-choice group with the goal of overturning Roe v. Wade. (Among their "extreme pro-life beliefs," according to Vogue, is "the idea that the discarding of unused or frozen embryos created in the in vitro fertilization (IVF) process should be criminalized.")

"We, the following citizens of Michiana, oppose abortion on demand and support the right to life from fertilization to natural death," read the group's newspaper ad, which ran alongside commentary from the organization opposing Roe v. Wade. Signatories had only been asked to sign their name to the statement and not the Roe v. Wade commentary, according to the National Review.

Founded in 1972, St. Joseph County Right to Life merged with Elkhart County Right to Life in January 2020 to form Right to Life Michiana. The group has touted itself as "one of the oldest continuously active pro-life organizations in the nation." They seek to end abortion, assisted suicide, and euthanasia, according to their website.

While Barrett's personal views on abortion do not come as a surprise —she was quoted in Notre Dame Magazine as saying she believes "life begins at conception" in 2013, abortion rights advocates fear those views may influence Barrett's legal rulings. "Amy Coney Barrett's record tracks with Trump's promises in the 2016 election — a nominee who would be a sure vote to end legal abortion in this country," NARAL Pro-Choice America President Ilyse Hogue said in a statement opposing Barrett's nomination. "Her positions show she is a clear and present threat to reproductive freedom and the promise of Roe."

Barrett, however, claimed she draws a defining line between her personal opinions and the law. "It is never appropriate for a judge to impose that judge's personal convictions whether they derive from faith or anywhere else," CNN reported Barrett told Sen. Chuck Grassley during her 2017 confirmation hearing when asked to define when it might be appropriate for a judge to place their personal religious views ahead of the law.

During that same confirmation, Barrett also claimed her personal views on abortion would have no bearing on her ability to carry out her duties as a judge in a 2017 White House questionnaire.

"If I am confirmed (to the 7th Circuit), my views on [abortion] or any other question will have no bearing on the discharge of my duties as a judge," she wrote in response to a question asking if she viewed abortion to be immoral.