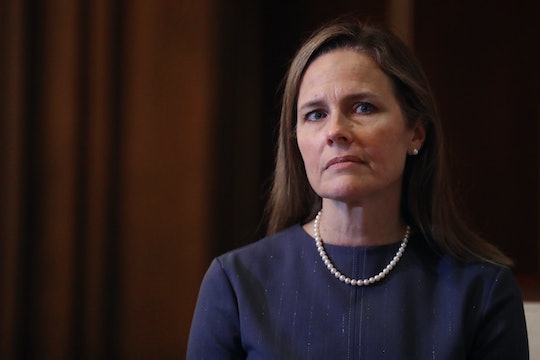 During Tuesday's presidential debate, President Donald Trump confirmed he would push for a swift confirmation of his Supreme Court nominee ahead of November's presidential election, sparking concern among abortion rights advocates who worry Amy Coney Barrett's views on Roe v. Wade could jeopardize abortion access. Trump announced late last week that he was nominating Barrett, a conservative judge appointed to the 7th US Circuit Court of Appeals in 2017, to fill the seat vacated by late Supreme Court Justice Ruth Bader Ginsburg. Barrett's nomination — and conservative views —have fueled an already intense 2020 presidential election.

"You don't know her view on Roe v. Wade," Trump told Biden in Cleveland on Tuesday as the two presidential candidates sparred over Barrett's nomination. And while it's true that Barrett has not yet spoken publicly about how she would rule on Roe v. Wade if confirmed to the Supreme Court, she's made her views on abortion clear both in and outside the courtroom.

Additionally, Barrett has been quoted in Notre Dame Magazine as saying she believes "that life begins at conception." In that same article, however, Barrett was also quoted as having said she believed it was "very unlikely" the Supreme Court would ever overturn Roe v. Wade. Rather she predicted the battle over abortion rights would shift toward funding.

But while Barrett has said her Catholic faith teaches that abortion is "immoral," she's also said her personal views on the topic would have no bearing on the opinions she issued as a judge. "If I am confirmed, my views on this or any other question will have no bearing on the discharge of my duties as a judge," Barrett said in written answers submitted to the Senate during her 2017 confirmation hearings.

So while Trump may not know Barrett's views on Roe v. Wade – the president told Fox and Friends he did not discuss the landmark Supreme Court case with Barrett before nominating her — voters can discern for themselves where the judge is likely to fall on the issue.