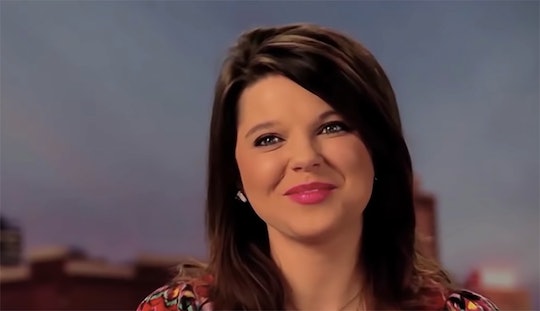 It's a boy! On Wednesday, Amy Duggar gave birth to her first child with husband Dillion King, People confirmed. Duggar, Jim Bob's niece and an occasional star of 19 Kids & Counting, delivered the baby via C-section, which she discussed on Instagram shortly before the delivery news became public.

Daxton Ryan was born weighing 7 lbs., 8 oz., and measured 20 inches, People confirmed. Little Dax is doing well, and it appears that both parents are over-the-moon with their brand new bundle of joy. “Smooth and easy delivery,” the couple’s photographer, Loren Bullard, told the magazine. “Both mom and baby are great and healthy!”

Amy and Dillon announced their pregnancy news in April, revealing in June that they were expecting a boy. This is the first baby for Amy and her husband Dillon King, according to OK! Magazine. The two shared their baby news on Instagram in April 2019, nearly four years after the two tied the knot. And the two have come along way since their appearance on the 2017 season of WE tv's Marriage Boot Camp: Reality Stars, where they hashed out their marital issues in group therapy.

Aside from the new baby, the past few months have been very busy for the parents. Not only did Amy just open a new location for her clothing store, but Dillon is launching his own restaurant in the Arkansas area. "One thing I've learned from my husband is that life is too short!" she said on Instagram about their big plans. "Go after your dreams! I'm so proud of you @kingdillpickle for always chasing yours! Cheers to a crazy Fall as new parents too!!"

As to what type of parents the two will be, Duggar offered the following info in an earlier interview with Us Weekly. “For me, I just want to be a hands-on kind of mom. He’ll be a hands-on kind of dad," she said. "We want to be involved in our kids’ lives no matter what they do. And they’re going to be our little best friends. They don’t know it yet, but they will.”

And before Daxton's arrival, Duggar shared a series of maternity photos with People, noting her excitement about impending motherhood. “I’ve always wanted to be a boy mom! Dillon builds lifted trucks, so I can just imagine how suped-up the Power Wheels will be,” she told the outlet. “We just can’t wait for this little ball of energy to arrive! He’s already named, so let all the embroidery begin. I am so obsessed with baby bath robes!”

The pair, who People noted have been married since 2015, are clearly very thoughtful of every aspect of expanding their family. As for her baby's name, Amy told the magazine that it sounded fit for, well, a King.

"He’s going to come out wearing sunglasses, like, ‘What’s up, I’m Dax!’" she added about the baby's personality. “[He's] going to have a cool style.”

Congrats to the new family of three. And here's to hoping we get to see more of baby Daxton on social media because there's nothing cuter than a newborn being doted on by his first-time parents.

More Like This
Michelle Williams Is Going To Be A Mom Of 3!
Why Gwyneth Paltrow Trolled Us All With $120 Gem Stone-Encrusted Luxury Diapers
Kate Middleton Keeps Getting “Broody” Around Adorable Babies
Andy Cohen Sweetly Calls Surrogate Who Carried Daughter Lucy His "Partner & Friend"