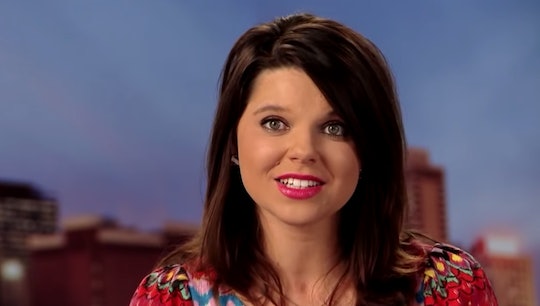 Amy Duggar Defends Having A C-Section In Latest Pregnancy Update

The Duggar family has made a name for themselves over the past decade not only for having a massive amount of children — but for allowing TLC cameras to capture their labor and delivery experiences. And oftentimes (although not always) Duggar women choose to at least attempt to have a home births. However, cousin Amy Duggar is having a C-section, and she isn't here for any shaming comments.

Amy had teased on Tuesday evening via Instagram that her baby boy — whom she is naming Daxton, according to People — would be making his grand entrance sooner rather than later. She did so by posting a photo of her bump with a "coming soon!" sticker on it.

Then on Wednesday, Oct. 9, the soon-to-be first time mama took to Instagram to give her followers a pregnancy update, In Touch Weekly reported. Alongside a photo of Amy and her husband Dillon King standing outside of a hospital, the Duggar cousin wrote, "Brb.. we're gonna go be parents now!! Surprise!! Our little Daxton will be here today!"

Amy went on to explain that because of her "small frame and the fact that the Dr. said there's an 85% chance" she'd have "an emergency situation," she and Dillon decided to go ahead with a planned C-section. "I'm sure there will be negative comments. But I have to do what's right for my body and what's healthy for my son," Amy wrote.

Despite being confident they were making the right decision, Amy confessed to feeling nervous leading up to the procedure, probably because she had never had surgery or even stayed in a hospital leading up to the delivery. Heck, I'd be nervous, too.

Amy continued: "In just a few hours our lives will be forever changed! I'm focused on God's promises and that sweet little face!! Ok, daddy let's do this!!!"

Meanwhile, father-to-be Dillon King shared the same photo on his own Instagram, writing, "Today is the day!! #daxryan Excited for the new chapter for our lives @amyrachelleking love you baby!"

Not long after revealing she would have a scheduled C-section on Wednesday, Amy shared a photo of herself wearing a hospital gown and cap in her Instagram Story. "Here we go!" she captioned the snap, along with a blue heart.

So far, it doesn't look like there have been any other baby updates from either Amy or Dillon. My guess is baby Daxton has already arrived and the new parents are soaking in those newborn cuddles during (or shortly after) the "golden hour" as I type this. Which means there's likely plenty of skin-to-skin contact, possibly breastfeeding, and of course plenty of family bonding going on as both mom and baby recover from the birth.

Because Amy has been regularly posting about her pregnancy, though, I have a feeling her fans will be awww-ing over newborn photos by Thursday morning at the latest. I know I can't wait to finally "meet" their baby boy. Congrats to Amy and Dillon on this new chapter of their lives together. Baby Daxton is one lucky little guy!