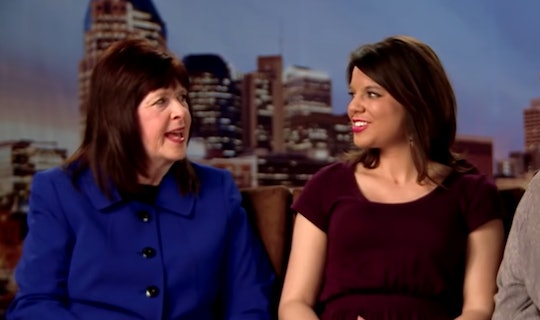 To say that 2019 has brought big changes to the Duggar family would be an understatement. In between all of the pregnancies that were announced, the birth of Jessa's baby girl, the pregnancies lost, and the death of a beloved family member, so much has happened since January. Grandma Mary Duggar's unexpected death, in particular, has rocked the world of Michelle and Jim Bob's family. So it's incredibly touching to see that Amy Duggar's baby shower honored Grandma Duggar, who had helped plan the event prior to her passing. Although Amy made some changes to the original party, she made sure Mary's presence was felt.

As you might know, Amy — the spunky and more mainstream niece of Jim Bob and Michelle Duggar — is in the third trimester of her first pregnancy. She and her husband, Dillon King, are expecting a baby boy whom they plan on naming Daxton, in October. And Amy was thrilled to share the pregnancy news with her grandmother, who she remained incredibly close to up until the matriarch's death. "We were best friends. We spent every waking moment together." Amy said during an interview with People Now. "She was just really, really, really special in my life — helped raise me."

So you can imagine the devastation that followed Grandma Mary's unexpected death in June. The Duggar family matriarch had slipped and fallen into a pool at her Springdale, Arkansas, home, TODAY reported, and her death was ruled an accidental drowning.

On Sunday, Aug. 25, the mom-to-be shared a couple of photos from a baby shower brunch she had over the weekend with friends. Amy shared a photo featuring a lemon cake, along with other goodies set out on a table for the event, according to In Touch Weekly. As it turns out, Amy and Mary had been planning a lemon-themed shower prior to her passing.

"Before Gma went to be with Jesus we were planning a huge lemon themed Baby shower pool party at her house," Amy captioned the Instagram post. "We were going to rent big white tents, and have huge white balloons in the pool and have it all decked out! But after her passing I could barely keep it together, I told myself I couldn't even think about having a shower without her and I just felt lost."

To be honest I've felt 'lost' for months... But y'all God is good, and everyday I'm just reminded of His faithfulness. I had the sweetest lemon themed brunch celebration today to honor her with my sweetest friends who loved on baby Dax and I! It was low key, fun, relaxing and exactly what my heart needed.

Too sweet, right? What a wonderful way to celebrate the impending arrival of baby Daxton while also honoring the memory of Grandma Duggar.

Speaking of baby showers, earlier last week, Amy shared a photo of herself and her four pregnant cousins-in-law, who all attended a baby sprinkle for Amy, Us Weekly reported. Amy, Lauren Duggar, Kendra Duggar, and Anna Duggar are all due in either October or November, while Abbie Duggar only recently announced her pregnancy on Aug. 1.

Grieving the death of a loved one while pregnant can be such a bittersweet time, something I know this from experience. The joy of growing this life inside of you seems out of place somehow when a family member has recently passed away. And yet, time marches forward.

Personally, I admire the way Amy Duggar approached her baby shower. She honored her late Grandma Mary — along with the theme they had planned together — while also scaling down the even to be a more low-key, intimate gathering. Because that's what Amy needed during this time of simultaneous time of grief and celebration of new life.