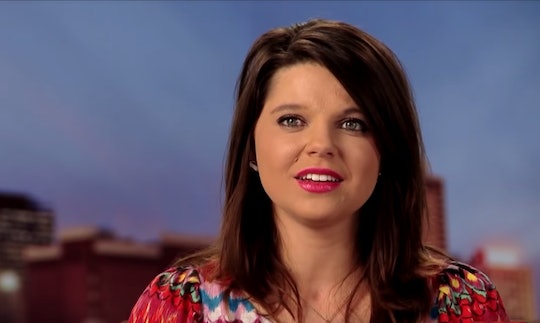 If you're a fan of TLC's Counting On, then the past couple of months have probably been a bit overwhelming for you — but in a good way. That's because it seems like a Duggar is announcing a pregnancy ever other week or so. (I swear, there must be something in the water over there in Arkansas.) In the midst of all this excitement, however, you might have actually missed one Duggar's baby news. And Amy Duggar's new bump photo reveals she's already halfway there.

You probably remember Amy — Jim Bob's sister Deanna's daughter — from the family's 19 Kids & Counting days. Every once in a while, the spunky and more mainstream cousin would appear alongside Michelle and Jim Bob's 19 children for special events or family gatherings. Since her days as "cousin Amy," Duggar has pursued a singer career, according to In Touch Weekly. She also married her longtime friend-turned-lover, Dillon King, in 2015. (You might have even caught their TLC special Amy & Dillon: Married One Year.)

These days, Amy is embarking on yet another new adventure: motherhood. That's because she and Dillon announced on April 21 that they're expecting their first child together, according to Us Weekly. “BABY KING IS ON THE WAY!!!” Amy captioned an Instagram photo of herself and Dillon holding balloons that spell out, "BABY." “Happy Easter from our growing family to yours!!”

“We are completely speechless, overly excited and ready for the next chapter as new parents!” the couple told People at the time. Amy went on to say that she's missing eating at Chick-Fil-A during her pregnancy because “Baby King isn’t a fan of chicken.” She later added, "I’m over the moon about becoming a momma! I just can’t hardly wait!”

On Wednesday, March 21, Amy shared a bump photo next to a bulletin board that read, "Oooohh we're halfway there." She captioned the photo, "20 weeks today!!! #octoberbabySomeone finish the song! ;)."

Just last week, Duggar had shared a mirror selfie showing off her growing bump — along with her excitement. "I see you little bump!! 19 weeks today!!" the mom-to-be wrote on Instagram.

There's still no word yet on whether Amy is expecting a baby boy or a girl — or if she and Dillon are waiting to find out their baby's sex until after the birth. However, it's clear the expecting mama is serious about eating a balanced diet while growing a tiny human. Either that, or that just happens to be what "the baby" is craving. (Well, most of the time.)

In fact, Amy recently shared a photo of the contents of her shopping cart, writing, "I love eating healthy! Luckily this baby loves salad, fruits & veggies! I can't get enough cereal with sliced banana either with the occasional ice cream cone and Milkway midnight miniature candy bars thrown in the mix!!😂 What did you crave when you were preggo!?"

Hopefully, Amy Duggar's pregnancy continues to go smoothly as she begins the second half of her journey. I wonder if TLC will do a special when it's time for her to give birth? Heck, she could even make a special appearance on Counting On. Either way, I wish Amy and Dillon the best as the weeks continue to count down until their baby's arrival. Congrats, again, guys!