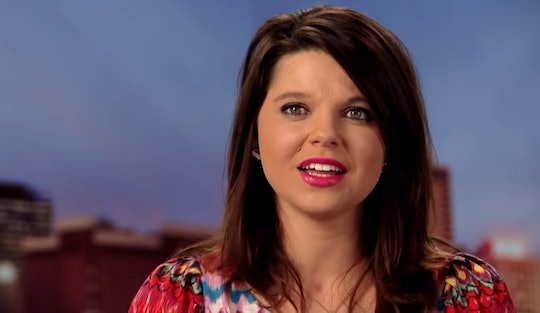 Few things in life compare to the amazing sensation of feeling your baby move inside of you for the first time. Those first, distinct flutters can be so magical and surreal. As your baby grows, however, these movements tend to get stronger — uncomfortable, even — and they often occur at the most inopportune times. Like when you're completely exhausted and trying to go to sleep, for example. Which is why Amy Duggar's pregnancy update about her baby's kicks is all too relatable.

If you've been following the Duggar family for a while, then you probably already know that Amy is actually Jim Bob's niece — meaning she's the cousin of his and Michelle's 19 children. (Except, she is a bit more mainstream in her lifestyle and way of thinking than her ultra-conservative family.) As Us Weekly reported, Amy and Dillon King announced in April that they are expecting their first child together. They had tied the knot in September 2015.

On Thursday, July 11, the mom-to-be shared a pregnancy update with her Instagram followers, according to Life & Style magazine. The photo featured the expecting mama with her hand resting on her bump and holding a chalk board that reads, "3 AM: Time to go all Kung Fu Panda on mom's bladder." In the caption, Amy recounted an all-too-familiar conversation she had with her husband at 3 a.m — which started with Dillon asking her why she can't sleep. "Ummm he's tap dancing on my rib cage," Amy replied. (Which is a valid point, if you ask me.) "Love my little ninja kicking machine," she ended the post.

For the record, Amy's Instagram followers could totally relate to her bedtime plight. One person commented, "I was convinced my daughter was using her umbilical cord as a jump rope."

Yet another Instagram user warned, "Wait until he karate chops your full bladder in the grocery store."

Since the Kings announced their impending parenthood in April, Amy has offered regular updates for her followers. She shared her first bump photo at 19 weeks along in May. And the mom-to-be look so excited.

She posted another cute update a week later — at the halfway point of her pregnancy — with the help of some Bon Jovi lyrics. "Oooohh, we're halfway there," the chalkboard read. Around that same time, the Kings also revealed the sex of their baby: It's a boy!

At 26 weeks, Amy shared her oddly specific pregnancy cravings with followers, writing, "Ok I want like a garden salad with like good good ranch, and cucumbers, a slice of french toast with IHOP strawberry syrup, chocolate chex cereal with sliced banana, throw in some fettuccine alfredo, grapes and crunchy cheetos too!" (Honestly, all of that sounds good to me, too.)

As Amy is nearing her third trimester, it's clear the cravings and pregnancy-related insomnia are hitting hard. Unfortunately, those 3 a.m. Kung Fu sessions will probably only get worse from here on out. (At least they did when I was pregnant.) In the meantime, I can imagine she and Dillon are getting more and more excited about meeting their little guy as the days continue to count down until Amy's due date. I know I can't wait to finally "meet" their baby boy!