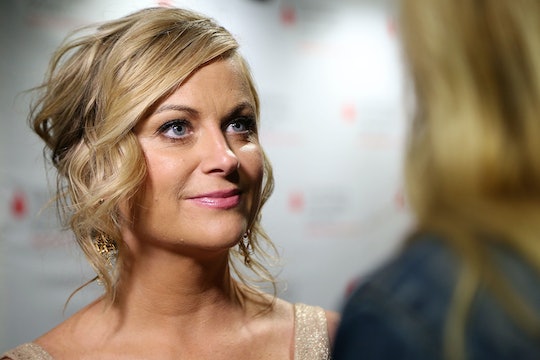 Amy Poehler's Advice To Moms Remains The Greatest Of All Time

Back in 2014, when Amy Poehler released her memoir, Yes Please, we all still believed in love. For a second, at least, she was still with her husband Will Arnett, with whom she has two adorable kids. Barack Obama was president, and it seemed low-stakes and fun when Poehler did a rap about Sarah Palin while nine months pregnant with her first child on Saturday Night Live in 2012, because, haha pregnancy, and hey, someone as unqualified as Palin wasn't getting elected to office, right?! Innocent times, innocent times. Poehler's book got nowhere near the attention that her buddy Tina Fey's Bossypants did (imo, a feminist bible), in part because it suffered from the post-publication revelation that the marriage discussed so lovingly within was — post-script! — no longer (the same fate that tainted Anna Faris's recent book). But it contains far and away the best piece of advice I have ever encountered as a parent.

And no, I'm not talking about this gem:

Telling me to relax or smile when I’m angry is like bringing a birthday cake into an ape sanctuary. You’re just asking to get your nose and genitals bitten off.

For her fame and wealth, Poehler’s experiences as a mom feel very familiar. Reading her memoir, I had the sense that Poehler had rushed the thing — it was somewhat of a pastiche of lists and creative chapters among actual details about how she broke out as a comedian and actor. I'm not imagining this — she constantly alluded in the book to her struggle to finish it, and as a parent, I get that the six spare minutes you have each day to get something done isn't quite enough to write a thrilling best-seller. Relatable!

But on to the golden passage.

Poehler discusses the endless judgement that women face for doing medicated births, or having c-sections, or bottle-feeding, or dressing their children in handmade woolen bonnets like tiny pilgrims. To all of it, she offers one piece of advice, simply say to the other women doing things differently, “good for you... but not for me.” Let everyone else’s achievements and choices roll off you like water off a duck’s back.

That is the motto women should constantly repeat over and over again. Good for her! Not for me.

The germ of it is that it is very easy to react to what other people are doing as though it is a personal affront to your choices. In reality, people are skipping along to their own beat, giving birth in teepees, or sautéing their placentas with garlic and soy sauce, or conducting month-long lie-ins after delivery in a pile of crystals in no way at all as a riposte to whatever you're doing.

Momming is hard enough without comparisons. The thing I personally like to feel sh*tty about is being a working mom, but I can easily widen my lens to feel bad about my sleep-training, formula-supplementing, non-exercisey mom-life.

Any time you see a mother narrating the world to her child while you lie face-down in the grass half-ignoring yours, or see a woman still managing to nurse her 2-year-old, or see a potty-trained 15-month-old emptying her own potty tray into the bath, the only acceptable response is "good for her! Not for me."

Oh, you gave birth naturally in the alkalized ocean under a cold moon? Good for you!

You're actually at a weight lower than pre-pregnancy? Ho for you, my friend! *said while snacking on beer cheese*

You're already running marathons and hosting board meetings at three months postpartum? Huzzah!

Good for you — but not for me.

There is a passage in Yes Please when Poehler talks about the moment you find out you're pregnant; those early days when you don't take anything for granted:

It’s a really magical time, those first few weeks. It almost makes you wish you didn’t have to tell anyone, ever. You could just watch your belly grow bigger, and no one would be allowed to ask you about it, and you would have your baby and a year later you would allow visitors to finally come and meet your little miracle.

It's a great little touchstone, those moments you almost forgot where you felt like a magic unicorn when you first got pregnant. It's so easy to get past that and really focus on the ways in which you're f*cking it up, but really, you need to dig up your sense memories as a furious no-cares-given pregnant person. Of pregnancy, Poehler says:

Women really are at their most dangerous during this time. Your hormones are telling you that you are strong and sexy, everyone is scared of you, and you have a built-in sidekick who might come out at any minute.

The rest is noise. Remembering your own power and instincts, and feeling free enough to shake it while you've got it is great advice for all moms, at every stage.