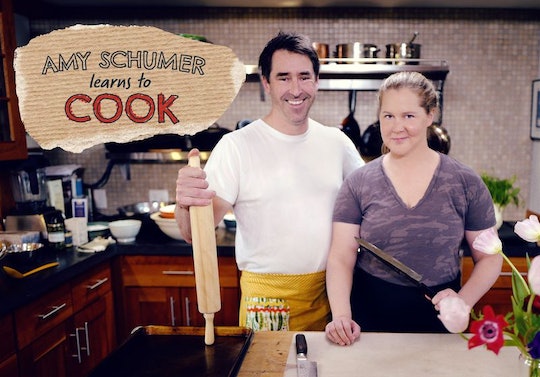 If you're in a quarantine cooking rut, have no fear. James Beard Award-winning chef Chris Fischer and comedian Amy Schumer are here to take you on a cooking journey like no other when their new show Amy Schumer Learns to Cook premieres on the Food Network on May 11.

Amy Schumer Learns to Cook follows Schumer as she both learns to cook from her husband and tries to survive life on lockdown with him, their adorable son Gene, his nanny Jane, and their dog. So in addition to being purely entertaining, it sounds like Amy Schumer Learns to Cook will also provide some promising opportunities to hear some mom truth bombs from Schumer. What's more, the show will also feature video chats with some of the comedian's famous friends. Food Network President Courtney White described the show's appeal as "intimate, real, fun and just great TV."

"The nanny holds the camera, as Chris makes incredibly delicious food and Amy’s sharp wit delivers laugh out loud moments all the way through," White said in a statement. "Mix that with poignant moments of a family sharing their challenges during this pandemic and you have a series that many will relate to and some will likely become addicted to."

Fortunately, you won't have to wait too long to go behind the scenes with Schumer and her brood. Amy Schumer Learns To Cook is set to premiere on May 11 at 10 p.m. ET on the Food Network.

Along with at-home content, Amy Schumer Learns to Cook will feature some actual cooking lessons. The premiere on May 11 will be a double-episode focused on breakfast during which Schumer will learn to poach eggs and master the recipe for a perfect Old Fashioned cocktail. Other episodes will walk viewers through tempura-battered fish tacos and a “quarantine movie night” with potatoes, lamb sliders, and a Greek salad dip. The eight-episode series will also show Schumer and Fischer cooking side-by-side, preparing comfort foods and snacks, as well as nightcaps.

So if you're looking for some entertainment while social distancing at home, or maybe even looking to learn a recipe or two, it sounds like Amy Learns to Cook is the perfect order.