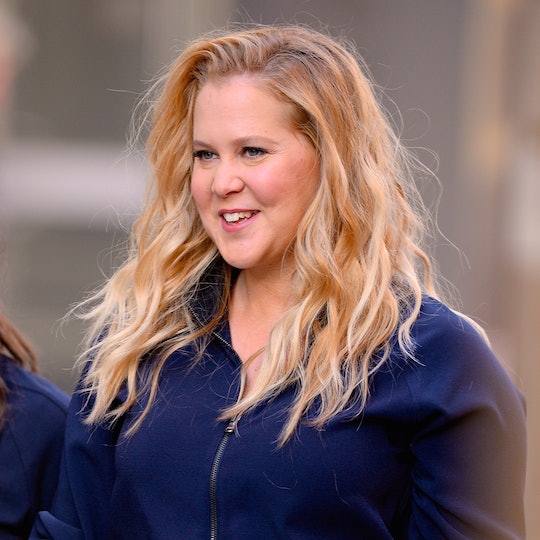 While reflecting back on what she called "a very good year," one of the funniest women in comedy is giving fans a peek into some of the more private moments of her life. Comedian Amy Schumer shared an intimate birth picture on Instagram while looking back on all that happened in her life in 2019. Along with landing her second Netflix stand-up comedy special, this past year also saw Schumer welcome a baby boy with husband Chris Fischer.

"It was a very good year," Schumer wrote in an Instagram caption posted alongside a collage of photos snapped throughout the year. Included in the collage was a photo of Schumer meeting and touching her son Gene Attell for the first time immediately following her C-section earlier this year. The photo represents a sweet moment in the family's history and is not one Schumer is believed to have previously shared with fans on social media, according to both People and TODAY.

While Schumer's end-of-year collage featured more than one sweet look into the comedian's new life as a mom, it also included snaps from some of her life's more hilarious moments. One photograph, for example, featured Schumer bending over a toilet naked. Others included Schumer getting up close and personal with a giraffe, hosting her Netflix comedy special Growing, vacationing with Fischer and baby Gene, enjoying a beach day with friend and fellow comedian Bridget Everett, and posing with her The Humans co-stars.

After getting married in February 2018, Fischer and Schumer welcomed baby Gene, their first child together, on May 5. While both Schumer and Fischer were instantly besotted with their newborn son, Schumer often spoke candidly about the challenges and complications her pregnancy brought her. In November 2018, the comedian revealed she'd been diagnosed with hyperemesis gravidarum, a severe form of nausea and vomiting, after being hospitalized.

"I am in the hospital. I'm fine," Schumer posted to Instagram Nov. 15, 2018. "Baby's fine but everyone who says the 2nd trimester is better is not telling the full story. I've been even more ill this trimester. I have hyperemesis and it blows. Very lucky to be pregnant but this is some bullshit!"

But pregnancy wasn't the only thing Schumer found to be difficult about childbirth. Earlier this month, she told People she found the whole experience terrifying. "It's all terrifying," the magazine reported she said. "Giving birth is the most terrifying thing you'll ever do that's completely worth it. Having a C-section was … my pregnancy was so hard, I was just very ready to meet my son."

Schumer's latest Instagram post shows just how special and emotional that first meeting truly was for the comedian.