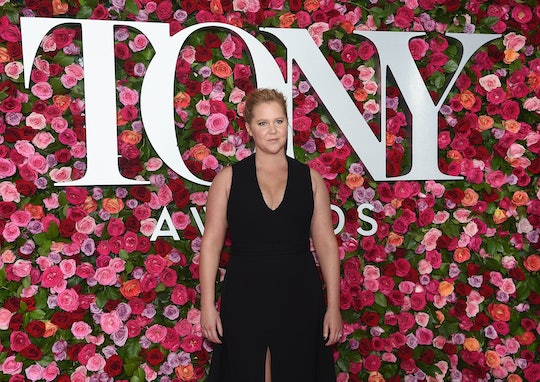 Pregnancy hasn't been easy for Amy Schumer, but she's in the homestretch and feeling better than ever. The 37-year-old comedian recently shared a photo of her bare bump, and Schumer said she's feeling "strong and beautiful" as she prepares to give birth, according to the caption of an Instagram photo shared ahead of her due date. She's been battling continued sickness throughout her pregnancy due to hyperemesis gravidarum, as Us Weekly reported, but it looks like she's finally getting some relief.

On Saturday, Schumer posted a photo of her bare belly on Instagram. In the picture, she can be seen standing before a mirror in a bra and underwear while holding her phone. Schumer noted in her caption that she "#didntpuke" that day, which is a nod to her battle with the aforementioned hyperemesis gravidarum, which, according to Kids Health, is a condition in which morning sickness continues throughout pregnancy. According to the site, it can cause women to lose weight and become dehydrated during pregnancy, and without adequate treatment it can interfere with the health of an expectant mom and her unborn baby.

"Feeling strong and beautiful today," she captioned the image, which is the first pregnant selfie she's taken in some time.

Schumer's pregnancy hasn't been easy. Last month she had to cancel the remainder of her comedy tour, citing her struggle with hyperemesis as the reason in a statement she posted on Instagram, as per People. Schumer said in the post that she was "not cleared to fly for the next couple weeks," so she had to call off the shows. She added in her statement that everyone who bought tickets would be refunded from where they purchased the tickets. Schumer noted in her Instagram post, "the baby and I are healthy and everything looks good." She added, "But I am in my 3rd trimester and I am still nauseous all the time and vomiting," revealing, "I vomit mostly every time i ride in a care even for 5 minutes."

"I have a pretty good attitude about it and some days I feel good for a couple hours. But mostly it's [sic] sucks," Schumer continued. "I wanted to push through and do my shows. Because I hate letting people down and I love stand up and money! But more than that I have to think about my health and the baby. I know you guys get it and people are like, 'B*tch, are you OK? Take it easy,' but it's still embarrassing to have to cancel."

Schumer has been open with fans about her struggles with hyperemesis throughout her pregnancy. She appears to be taking it in stride (at least, as best as she can), though she's obviously having a hard time. In late December, she posted a video of herself vomiting on the side of the road while her husband and dog wait for her.

"And so this is Christmas," she captioned the video, which was accompanied by several other photos and clips from the celebration.

Days earlier, she posted a photo of herself getting an IV at what looked like her home. She did not reveal too many details about exactly why she was getting the treatment, but joked, "Am I glowing? #hyperemesisgravidarum," in the caption. About a month prior, she posted a photo from the hospital, where she was being treated for related complications. In the caption she got candid about her condition, revealing that she had to miss a few shows in Texas because she was suffering so badly.

"Texas I am so deeply sorry. I have been really looking forward to these shows. I have to reschedule. I am in the hospital. I'm fine. Baby's fine but everyone who says the 2nd trimester is better is not telling the full story. I've been even more ill this trimester. I have hyperemesis and it blows," she wrote. "Very lucky to be pregnant but this is some b*llsh*t!"

Here's hoping the end of Schumer's pregnancy is smooth sailing compared to what she's been dealing with for the last few months. She hasn't revealed exactly when her baby is due, but, it's safe to say that fans are looking forward to this little one's arrival. Hang in there, Amy!