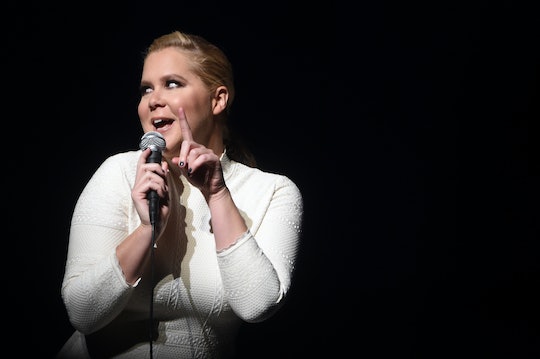 One of the many, many very annoying and totally unnerving things about catcallers is that they seem to be everywhere, getting too close and commenting on women's bodies. Everywhere, that is, except at a show comedy show hosted by one of the our leading feminist icons and a true master of the roast — at least, not after she was done with a particularly disrespectful one. At a Stockholm, Sweden, stand-up show Wednesday, Amy Schumer shut down a heckler who rudely implored her to "show us your t--s," and it was epic.

Just a few minutes into Schumer's act, the man yelled at her to show the audience much, much more than they had paid to see. Instead of simply ignoring the bozo or immediately asking security to get him out of there so she could go on being hilarious, Schumer interrupted herself to shame the guy for his behavior, which is exactly, exactly what he deserved.

"OK, wait, I want the guy who just yelled 'show us your tits' to come up here," she said, searching the audience for the source of the disturbance. "It's too good. Come up here. Everybody point at him so I know which one."

It was an empowering moment to watch. Hecklers and others who harass women for sport operate on their own perceived entitlement and thrive on a feeling a impunity, believing that it's their right to belittle and objectify women in any way they please without consequence. Most have probably never interrogated why they do what they do, or considered how unsafe the harassment makes often women and girls on the receiving end feel. For Schumer to instruct the audience to single out the man who thought it appropriate to attend her show only to loudly spew sexist filth, she challenged those norms while asserting her dominance as a major badass.

Schumer refused to let him get away with it, and she wasn't done.

After the audience identified the guy, Schumer chatted with him directly, calling attention to his very un-classy shirt and finding out that he works in sales ("How’s that working out?" she scoffed. "Is it going well? Because we’re not buying it.") She warned him that if he yelled again, he'd end up in the parking lot. But she, the patient goddess that she is, resisted from giving him the boot after one catcall, even as it appears that security was lurking and ready to do so.

Instead, she again put him on blast, a move that signified that, no, Schumer does not like hecklers, but also called out all men who engage in that kind of behavior, everywhere. Of course, I'm definitely aware that #NotAllMen pull this BS, but I hope all who do are subjected to some version of what Schumer said next:

Don't throw him out. Just look him in the eye. Tell me you're gonna see a scarier motherf---er than that guy. I'll show my tits when I want to.

Yes! Look him in the eye. Show him how disgusting what he's saying and doing really is. Show him he's the one who needs to be alienated right now. Show him that his intimidation will not stand. Show him that people who buy tickets to an Amy Schumer show want to spend two hours laughing so hard they can't breathe because she's a comedic genius, not dealing with some doofus whose mind never left elementary school.

And when he yelled again, she totally had him kicked out.