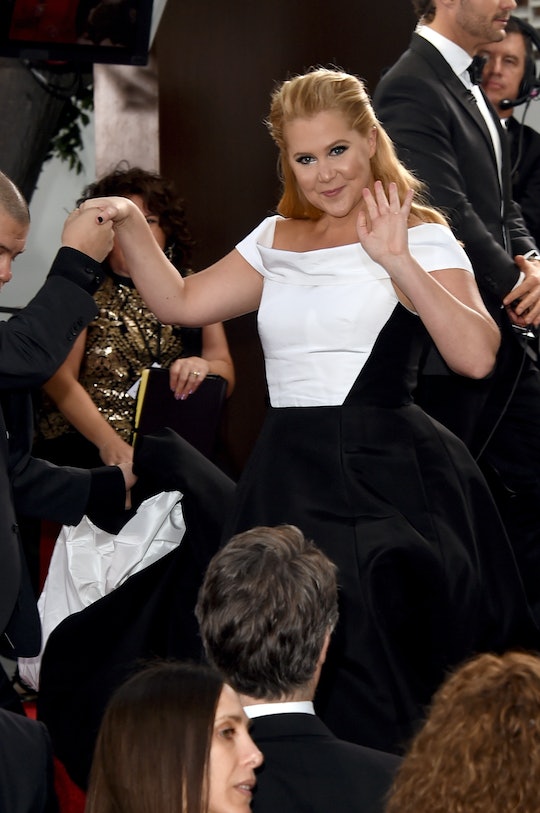 Amy Schumer Talks About Her Vagina On The Golden Globes Red Carpet, Dances, And Continues To Win Our Hearts — Obviously

With her sister by her side, Amy Schumer on the Golden Globes red carpet was all we could have asked for and more. It seems like she brought her sister, Kim Caramele, along to help her figure out what she could and couldn't do at the Globes, which was hilarious. When talking to Ryan Seacrest and Caramele about what she could and could not say on the red carpet, Schumer answered, "My vagina itched and I asked if I could address it."

The beautiful, unfiltered self that is Amy Schumer kept it real as ever this year. She's up for a Best Actress Golden Globe award for Trainwreck, and was honest when it came to what she'd learned from working on the film. "I learned, like my character did, that I wasn't in a good place to be in a relationship." That's deeper stuff that I probably wouldn't be able to whip out on-demand on the red carpet — but that's why I love Schumer. Well, and also for being able to go from deep to hilarious in 2.5 seconds, which she totally did.

After that, her sister challenged her to break it down for Ryan Seacrest. After briefly saying she didn't dance, Schumer then immediately proved herself wrong by giving us some amazing moves:

Schumer had us laughing before the Golden Globes even began, by sharing a text exchange with her best friend. Apparently comedian Rachel Feinstein got in touch with Schumer Sunday morning asking if she wanted to hang out at New York's Comedy Cellar. To which Schumer replied, "I have plans tonight." Plans such as possibly winning a Best Actress award at the Golden Globes?

Amy Schumer's openness, honesty, and — of course — hilarity helped keep the Golden Globes red carpet fun and not too serious. Schumer makes it feel like a bunch of celebrities are just hanging out, goofing about, and sharing a few thoughts on their personal lives and projects. Plus, who wouldn't want a helpful sister or friend along to help them decide whether or not they're saying something socially appropriate? I know I could use that now and again.