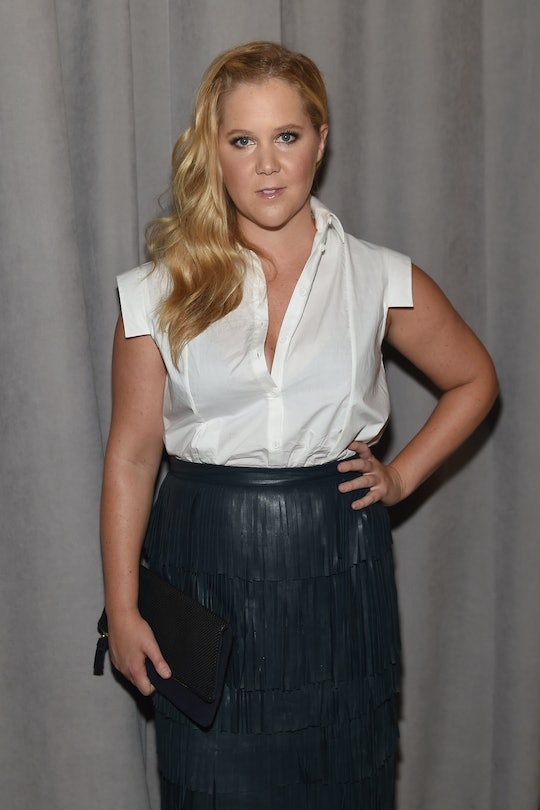 Amy Schumer has been nailing her Instagram posts lately. From Schumer's pregnancy announcement featuring a photoshopped photo of Meghan Markle's body to a video of the mom-to-be running Baywatch style on the beach, she's delivering grade-A content daily. As for the latest comedic win? Look no further than Amy Schumer's take on the 2009 vs. 2019 challenge, a masterpiece that's hitting the mark with parents.

In case you're in the midst of a social media blackout at the moment, the 2009 vs. 2019 challenge is a before and after exercise that has gone viral for some reason. Countless celebrities have picked up on the trend, including Pharrell Williams, who I only mention because he still looks 100 percent the same. I'm starting to believe those vampire theories, to be honest.

Although the idea of the game is to use and old photo of yourself versus a current one, Schumer put a creative spin on it. Instead of using a snap from 2009, she channeled Charlize Theron's character in Monster. Yes, Schumer implied that her "before" is Hollywood's take on American serial killer Aileen Wuornos. Bless you, Schumer.

As for the "after" pic? Schumer donned a black bra and pregnancy tights for the occasion, a look she complimented with sunglasses and boots.

As you'd might imagine, Schumer's hilarious Monster reference and her pregnancy fashion is a big hit with fans. "The best yet!!" one person commented on the post. "You lovely pregnant lady."

"Oh my gosh, I was waiting for someone to post some ridiculous funny picture...SO Over this then and now! LOL!" someone joked. "'Oh yes, you haven’t aged at all' ..blah blah blah."

Another person chimed in: "Omg hilarious!!"

Others complimented and inquired about Schumer's ensemble.

"You’re perfect thanks for shedding true light on everything a woman goes through from getting stage ready to just being a pregnant woman!!" a fan commented. "GO GIRL!!!"

Someone else wrote: "Maternity spanks?!!! Where tf were these when I was pregnant?!!!!"

If you've followed Schumer's pregnancy journey from the jump, you're probably not surprised by her self-deprecating humor. Schumer has relied on jokes and sarcasm to see her through the ups and downs of pregnancy, including her battle with hyperemesis gravidarum. The condition can cause constant nausea, vomiting, dizziness, weight loss, and possibly dehydration, according to Healthline.

Schumer's most recent update about her condition came in the form of a hysterical Instagram post on Dec. 14, 2018. "Am I glowing? #hyperemesisgravidarum," she captioned a shot of herself in the midst of an IV drip.

Of course, Schumer's experience hasn't been all bad. Through the struggle, the comedian was reminded of her great group of female friends.

"Happy new year to the women in my life and yours," she wrote on in Instagram in early January. "What would we be without our friends? Nothin. Here is my sister tying my dumb shoe. Women, we are amazing and our love for each other is so deep. Let’s continue to link arms this year and move forward. All of us."

As Schumer's pregnancy progresses, I expect she'll share more hilarious content. It's going to be difficult to top her amazing 2009 versus 2019 challenge, though.