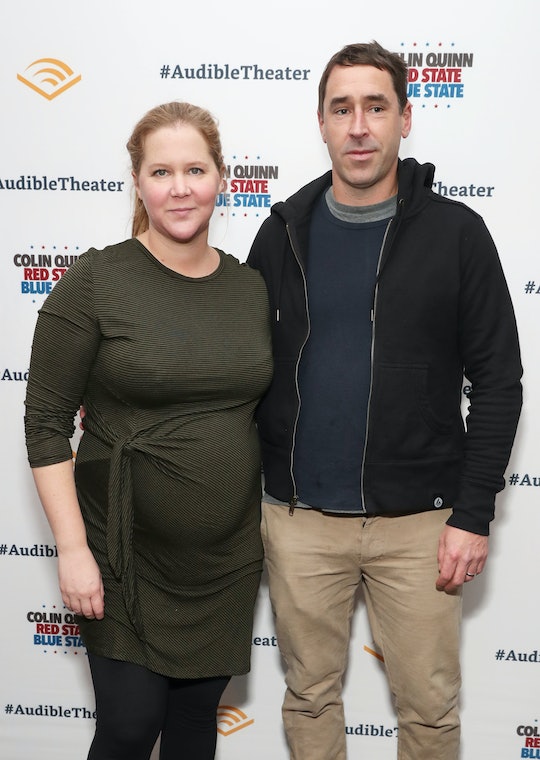 Amy Schumer's Birthday Photo With Gene Is So Adorable

Amy Schumer has only been a mom for four weeks, but she is clearly owning the role. Her life has changed completely when she gave birth to her son, Gene and her recent Instagram posts only highlight this. For example, Amy Schumer's birthday photo with Gene only proves how much birthdays change when you get older — but like a seasoned parent, she doesn't seem to mind.

For many people, your birthday is a day meant to be spent celebrating in the most lavish way possible with the people that you love. But once you become a parent, some things change. Birthdays are just another day spent getting older — it's not glamorous, it's just reality. And Schumer definitely knows this to be true.

Schumer turned 38 years old on Saturday, June 1, according to TODAY, but she left the partying to professionals. Instead of going out, Schumer stayed in with her super adorable son, Gene Attel, who she welcomed into the world with husband, Chris Fischer, on May 5, according to CBS News. In the photo, posted to her Instagram account on Saturday night, Schumer can be seen lying in her bed, snuggled next to her son (and dog), eating food right from her lap. It honestly looks like she's having the best day ever, and even she can't believe it.

"This s— is bananas," she wrote in the caption.

Sure, it might be a little bizarre, but Schumer's friends and followers are being super supportive of her in the comments of the Instagram photo.

"There is nothing as hard as that fourth trimester," one commenter wrote. "You don't know until you go through it. You're doing great mama!"

"Embrace every minute because it goes by sooooo fast," another commenter added.

"These photos are the best because they're real," one commenter perfectly stated.

I mean, they have a point. Which parent hasn't snuck a meal in bed while their kid sleeps peacefully after hours of crying? Clearly, Schumer is there and she isn't afraid to show it. Although these comments are super encouraging (and the kind of words that every new mom needs to hear at some point in time), it doesn't seem like Schumer needs them at the moment. On Sunday, she once again posted a snap from bed with her son, but clearly had no intention of leaving bed.

"I recommend this," she wrote on the photo in her Instagram story.

This wasn't the only Instagram post that Schumer made in honor of her birthday. She also posted a hilarious photo of people she didn't know at a party, to indicate that it was a special day for her. "Today was the best birthday ever!," she wrote in the caption of the photo. "I'm not in this picture and I don't know these people but it was such a nice birthday."

Although it might have been a change for her, she clearly had the best day ever. And now that she has her son in her life, she has so many more birthdays to look forward to with him in it. How's that for the best birthday ever?