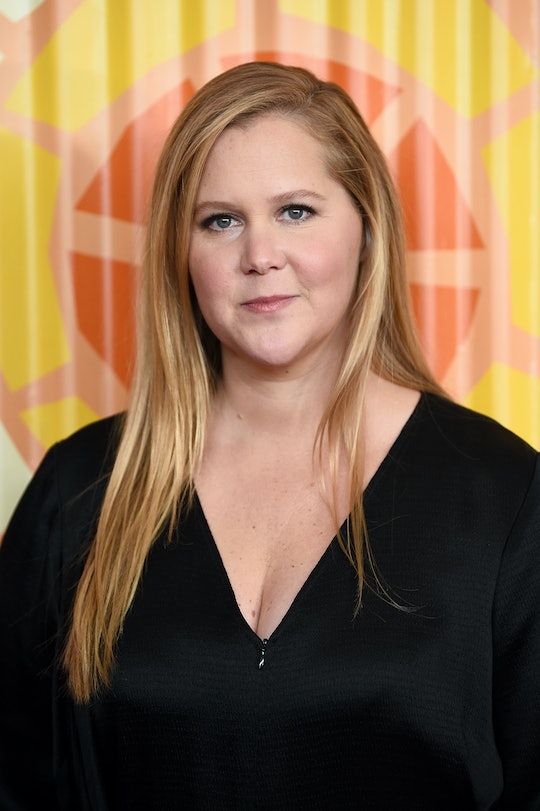 Those who have been following Amy Schumer for the past year or so know the comedian had a complicated and difficult pregnancy thanks to a condition called hyperemesis gravidarum. Fans are also likely aware the Growing star delivered her adorable son, Gene, via C-section in May. And recently, Amy Schumer revealed her C-section took over three hours and, understandably, she said it was "really scary."

During her pregnancy with her first child, Schumer didn't hold back when it came to the severity of her around-the-clock nausea and vomiting. She shared photos of herself getting IV fluids at hospitals, as well as "humble brags" about not having thrown up at all that day. In true Amy Schumer fashion, she even shared a video montage of herself throwing up in various places.

One aspect about pregnancy/childbirth Schumer hasn't talked about much until recently? Her C-section. Not long after delivering, she shared a couple of photos of her scar on Instagram, but as Schumer revealed in December, it was actually an elective procedure. In a photo of a medical form posted her Instagram Story, Schumer indicated that Gene was delivered at 39 weeks gestation via C-section. And for the "reason why" she had the C-section, her answer was, "My Choice."

And on Dec. 26, Schumer opened up about how difficult her planned C-section at 39 weeks was during an episode of the Informed Pregnancy and Parenting Podcast. “It was a rainy Sunday and I woke up vomiting and was like the sickest I’d been the whole time,” Schumer said of the day she opted to have the C-section. “And I was like, ‘I can’t do this anymore.’ I was so big and I was so miserable and couldn’t keep anything down.”

As for the C-section itself? It was definitely no walk in the park. "I was throwing up through the first hour of my C-section," she explained. "It’s supposed to take about an hour and a half — mine took over three hours because of my endometriosis. And that was really scary."

She went on to say her doctors were "amazed" she was able to carry a baby at all, considering the seriousness of her endometriosis. Had Schumer not scheduled a planned C-section, they revealed, she would have "with no question" ended up needing one anyway. And thankfully, for Schumer, she revealed on the podcast that her HG symptoms disappeared instantly after delivering her son, Gene.

Schumer described the recovery from her C-section as "brutal," during the Informed Pregnancy and Parenting Podcast. “I had a fresh C-section which had complications [but] I was just so happy,” Schumer said. “I mean, other than just having a baby, which a couple of people told me the day you give birth is the best day of your life, and that was true for me, but that relief.”

If you paid close attention to Schumer's nearly-1-hour-long interview, you might have caught a cool piece of trivia. During the podcast, Schumer also revealed the inspiration behind her son's name. Gene was actually named after her husband Chris Fischer's late mom, Jean. (Or maybe "Jeane." It's hard to tell for sure.)

Seriously, though, I would highly recommend listening to the podcast episode featuring Amy Schumer in its entirety if you have the time. Because her insight into pregnancy and childbirth with hyperemesis gravidarum and endometriosis is eye-opening. And in my opinion, it only confirms how much of a badass warrior mama she really is.

More Like This
Here's How To Keep Your C-Section Incision Dry
Are You Leaking Amniotic Fluid Or Is It Normal Discharge? Experts Explain
Alec & Hilaria Baldwin Welcome Baby #7, And Revealed Her Cheerful Name
What Does Amniotic Fluid Smell Like? A Nurse Explains