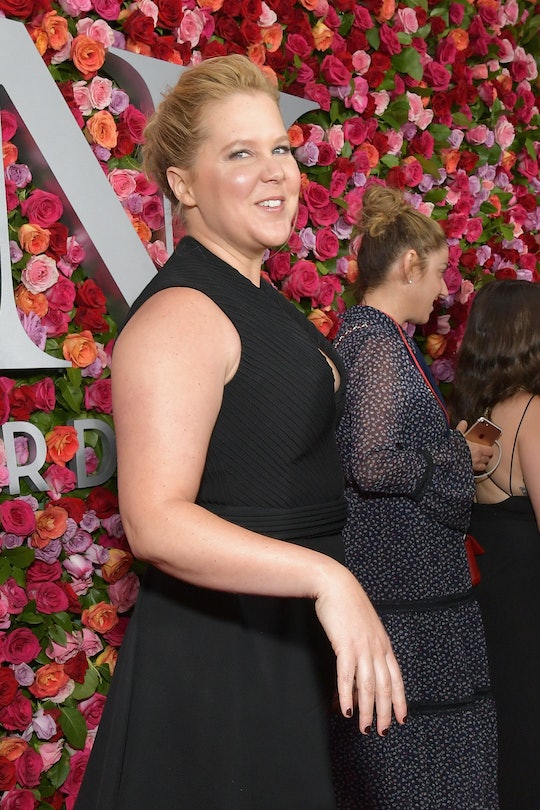 In the months following childbirth, a woman's body is well, different. She just spent the better part of a year growing an entire human — and then pushing that human out of her nether region, after all.. It takes time for things to get back to normal. And to be honest, it might never be exactly like her pre-baby body. Coming to terms with your "mom bod" can be difficult for new moms, especially during beach season. But Amy Schumer's "Gold Bond Girl" photo of herself wearing a swimsuit is #momgoals.

Just as a point of reference, the comedian welcomed her first child with husband Chris Fischer on May 5. Which makes baby Gene 2 months old at this point. Well recently, Schumer decided to reenact a scene from James Bond movies. (You know, the ones where a woman is wearing a barely-there bikini in front of a yacht?) Only, Schumer did it with a hilarious twist: Instead of a yacht, it was a fishing boat; instead of a bikini, she wore a one-piece, black suit. And instead of James, it was, "Bond, Gold Bond," as she captioned the Instagram post.

As you might know, Gold Bond offers a number of skin care products used to treat scars, dry skin, stretch marks, and more. Considering Schumer is a new mom, there's a chance she might be sporting some stretch marks — which as many as half of pregnant women get, according to BabyCenter.

Regardless if Schumer is actually using Gold Bond, her caption is on-point. And her Instagram followers absolutely loved it. One person commented, "You’re one of my favouritest humans. Thanks for being transparent and a freaking wicked advocate.🙌"

Another Instagram follower wrote, "Legit love that you keep it too real."

Yet another fan declared, "I literally spit out my ice cream."

Schumer has been keeping it hilariously real since she welcomed her son, Gene. Like that time she posted a photo of herself rocking nothing but a bra and mesh undies while pushing a stroller, according to Today. "5 weeks. Hospital underwear for life!" she captioned the Instagram post. And to be honest? Same.

Not long afterward, Schumer clapped back at mom-shamers who criticized her for the revealing photo by posting a shot of her c-section scar. "I'm really sorry if I offended anyone with my hospital underwear. Except I’m just kidding," she wrote. (Yass, mama! You tell 'em.)

Can I say that I love the fact that Amy Schumer has continued her signature humor into motherhood — even when it comes to the uncomfortable parts. (Let's get real, especially when it comes to the uncomfortable parts.) She DGAF what people other think. But at the same time, she's shedding light on struggles and experiences so many fellow moms have also gone through. And honestly? I hope she never stops.