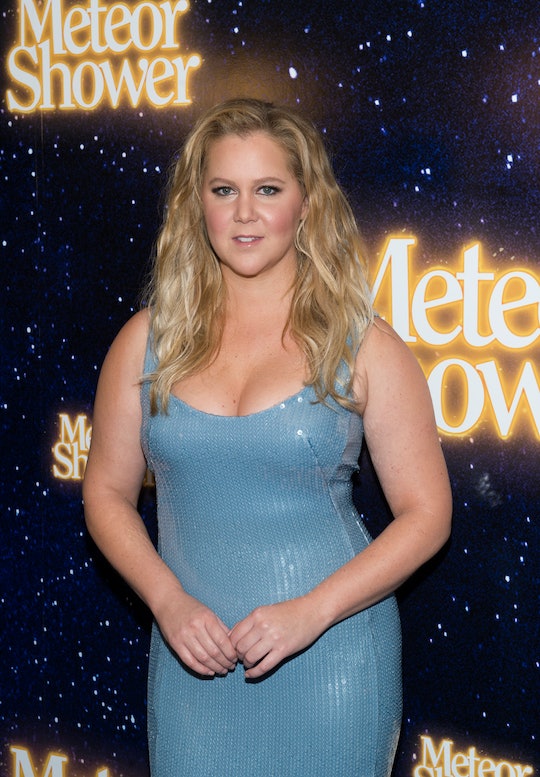 Those who have been following along with Amy Schumer's pregnancy know the funny actress has had a rough go of it so far. The first-time expecting mom has been extremely honest about her struggle with a debilitating pregnancy condition called hyperemesis gravidarum, which is characterized by severe nausea and vomiting to the point of dehydration, and sometimes even hospitalization. And she isn't afraid to show, often graphically, just how HG has taken over her life. At the same time, though, Amy Schumer's new bump photo shows the actress still has a sense of humor despite her struggle with HG.

On Tuesday, Dec. 11, Schumer took to Instagram to share a photo of herself and her sister, Kim, showing off two pieces in her Le Cloud clothing line, People reported. Schumer's little sis — clad in a super comfy-looking green outfit — is pointing to the expecting mom's bump, which is accentuated by the form-fitting red dress she's wearing. "Does this baby make me look fat?" Schumer captioned the post. "With my sister lil Kimby wearing head to toe @lecloudclothing 🐣."

Schumer's Instagram followers promptly responded to her tongue-in-cheek question. One person commented, "No it only highlights your beauty 💜💜💜."

Another Instagram user wrote, "No, you’re adorable, as always 💗 Queen 👑."

Yet another person chimed in with, "Nah b, you look radiantly pregnant! I know you feel absolutely terrible, and I have to give you props for being able to even marginally function, let alone look flawless doing so. ❤️."

Plenty of other Instagram users also offered words of encouragement to Schumer as she continues her struggle with HG. One fan wrote, "To look that beautiful while having HG 🙌🙌🙌🙌 that’s amazing I looked like death."

Another follower commented, "You’re rocking your pregnancy lady! Sorry you’ve been so unwell- I hope you’re still able to enjoy this special time with your lil bean! X."

Yet another person commented, "I hope you have good days in between the vomiting. I threw up until the very second I had mine... I truly sympathize ♥️🙌🙌."

Schumer even responded to a fellow HG sufferer in the comments. "♥️from one HG survivor to another, how are you feeling?," the fan asked. Schumer replied, "Pretty bad. Trying to get by. Thanks for the support. People don't understand this sh*t."

These positive messages come in light of Schumer recently sharing two different videos of herself vomiting — and then going onto perform her stand-up show a short while later. As ET Online reported, the comedian shared a clip of herself throwing up during a car ride to one of her shows in November. Over this past weekend, she then posted a video of herself heaving into a toilet in a public restroom. She captioned this particular post with, "Deep in my second trimester and all i can say is nope! Yesterday i did a show 90 minutes later #soblessed #godsmiracle #lepainbathroom 🦄."

Schumer first revealed her hyperemesis gravidarum diagnosis on Nov. 15, Today reported. The expecting mom took to Instagram to share a photo of herself in a hospital bed, writing, "Texas I am so deeply sorry. I have been really looking forward to these shows. I have to reschedule. I am in the hospital. I’m fine. Baby’s fine but everyone who says the 2nd trimester is better is not telling the full story. I’ve been even more ill this trimester." She continued:

I have hyperemesis and it blows. Very lucky to be pregnant but this is some bullsh*t! Sending so much love to the doctors and nurses taking great care of me and Tati! They are cool as hell! And Texas I am really really sorry and I’ll be out there as soon as I’m better.

I know that I — along with plenty of Amy Schumer's other fans — appreciate her honesty about how truly awful pregnancy can be. At the same time, it's also nice to see she has at least some reprieve from her violent nausea and vomiting from time to time. And the fact that she still has her amazing sense of humor about it all? Simply amazing. I wish Schumer well as she continues to tick off the days until she meets her little one. Hopefully, her HG symptoms begin to let up soon. In the meantime, hang in there, mama!