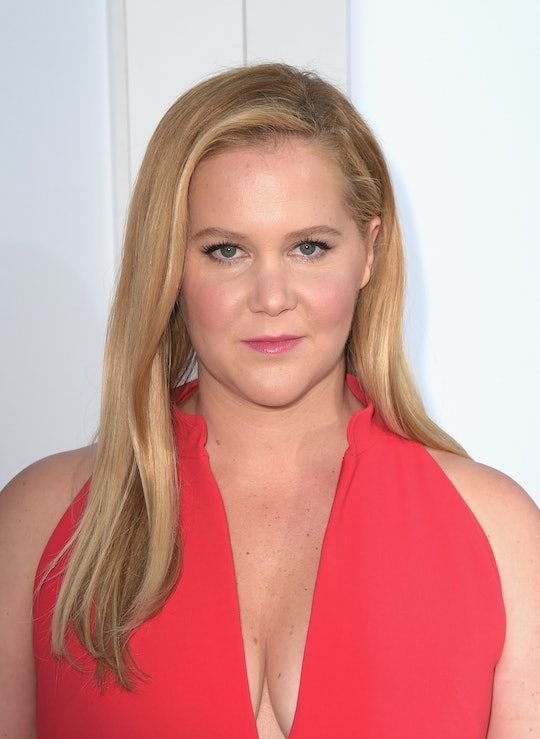 When I heard Amy Schumer had a Netflix special coming out, I simply could not wait to see it. Not only is she one of my favorite comedians, but I expected there would be plenty of pregnancy jokes as well as laughs involving bodily functions. Because let's face it, Schumer isn't one to be embarrassed by farts, or body hair, or the fact that she has a menstrual cycle. Well, I'm happy to report that her one-hour special definitely didn't disappoint in these areas. And as it turns out, Amy Schumer's period jokes in Growing are as accurate as they are hilarious.

The funny actress' comedy special dropped on March 19 on Netflix, according to Entertainment Weekly. And for me, it was pretty much 60 solid minutes of bursting out laughing and nodding along with her. Schumer shared with her live Chicago audience that despite her ongoing struggle with hyperemesis gravidarum, as TODAY reported, there was one perk about pregnancy she was enjoying: Not having a period. She cheekily referred to it as the "silver uterine lining." Which, amen. (Spoiler alert: It's also a potential perk of breastfeeding!)

“Right before I got pregnant I noticed how ashamed we’ve all been made to feel about getting our period," Schumer says, according to Marie Claire. "Our whole lives we choose it like, 'Ugh, can’t kick my bleeding habit! I want it! I wanna do it!' It’s supposed to be, you know, a secret. Like the second you get it, your mom goes, 'You’re a woman now! And that’s disgusting.'"

The mom-to-be goes on to compare what it's like for men versus women, adding:

Schumer then entertains the idea of women going out of their way to show guys their tampons — hilariously acting out a scenario during which a woman lures a male coworker into her office, only to pull out a used tampon and hypnotize him with it. She also suggests that maybe we should be sending "tamp pics" like guys send unsolicited "dick pics," according to Decider. And the annoyance/pain that comes with pubes getting stuck on the adhesive of pads? LOL.

Among her other all-to-relatable thoughts on periods, Schumer confesses how "terrifying" menstrual cups are to her (during which she references Kill Bill, per Decider). She also gives a nod to the free-bleed underwear brand, Thinx. "It’s a new invention called Thinx. Yeah, you don’t need a tampon, they’re just these underwear that you just bleed into," she explains, according to Marie Claire. "Which, I guess, makes me a f*cking inventor! Who knew?! Should I go on Shark Tank?”

Basically, if you're a woman with a Netflix subscription and haven't already watched Growing, what are you even doing with your life? Because Amy Schumer's special hits the nail on the head when it comes to periods. And I can pretty much guarantee you'll be laughing right along with the live audience.