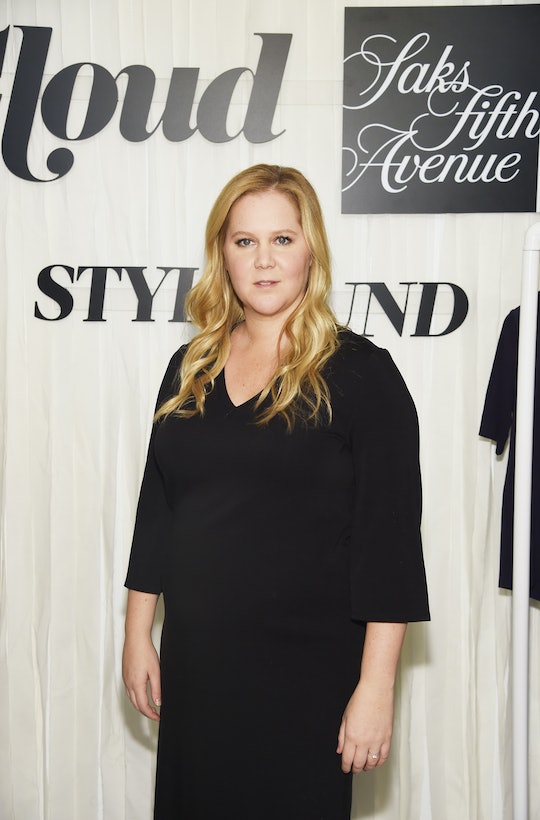 Postpartum bleeding is something moms-to-be don't really think about, until it's suddenly their reality. Those delicious baby snuggles? They're definitely something to look forward to. Finally being able to see your own feet and drink that glass of wine? You betcha. But the discharge and blood that follows childbirth isn't exactly a postpartum highlight. However, there are a few tools that make dealing with the mess and discomfort a million times easier — like the mesh underwear they give you at the hospital, for example. And Amy Schumer's post about loving mesh underwear is literally every postpartum mom.

If you haven't been following Schumer's journey to motherhood, the comedian and her husband Chris Fischer recently welcomed their first child — a baby boy they named Gene Attell, according to Us Weekly.

Like plenty of moms before her, it seems Schumer has a healthy appreciation for the mesh underwear they send home with you from the hospital. Because let's face it: When you're passing a decent volume of lochia after having a baby, it can be messy, itchy, and painful down there. Mesh undies allow for "breathing" in that area, they're super stretchy/non-restricting (which is glorious for that leftover bump, tenderness, and potential c-section stitches,) and it's NBD if they get stained.

Which is probably why Schumer took to Instagram on Saturday, June 8 to show a little love for this under-appreciated postpartum garment. One photo shows the new mom pushing baby Gene in a stroller — while wearing nothing but a bra and mesh underwear. (Okay, and tennis shoes.) LOL. In a second photo Schumer can be seen relaxing on a bed — while rocking her mesh undies, of course — and snuggling her baby boy close. "5 weeks. Hospital underwear for life!" she captioned the post.

Plenty of Schumer's Instagram followers wholeheartedly agreed with the "hospital underwear for life" bit. Fellow mom and model Tess Holliday commented, "Thanks for being so raw and vulnerable about the realities of post partum life. There is so much pressure placed on new moms to “bounce back” & it’s not real life. You’re doing amazing & you’re amazing & those hospital undies are COMFYYYYY💕💕💕."

Another Instagram user wrote, "Aren’t they the best?! They had to pry those, the ice packs, and witch hazel out of my hands!"

Yet another person chimed in with, "Yes! Take all the underwear that fit in your bag and run! Well waddle with the doggie pee pads in between your legs! It’s so glamorous to have a babe."

Another follower confessed, "I cried when I got to the last few pairs of postpartum hospital undies."

There was also that time Schumer shared a photo of herself pumping breast milk, according to E! Online. "Guys what are we doing tonight?" she wrote, alongside the hashtag #ootd.

As much as I loved mesh underwear after giving birth to each of my four kids, I can't say I would go for walk wearing only the hospital undies and a bra. But hey, whatever floats your boat. One thing's for sure: We can always count on Amy Schumer to keep it real about new motherhood!