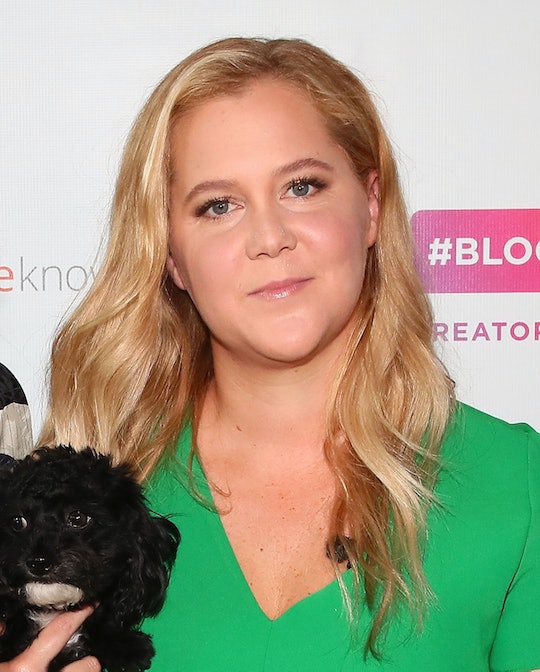 Amy Schumer and Chris Fischer's baby boy is finally here, and the first-time mom has stepped right into her new role. The comedian has shared a number of adorable pictures of her son, but none have been quite as cute as Amy Schumer's new selfie with her baby boy, which left fans gushing about her post-pregnancy glow.

The picture appeared on her Instagram early Friday morning, showing Schumer lying next to her newborn, whom she named Gene Attell Fischer, in what appears to be a hospital bed. Gene, just a few days old, is wrapped in a cow baby blanket in the picture, with a pacifier in his mouth and a hospital cap on his head. Schumer appeared to be resting the baby on her arm and shoulder, cradling him as he slept.

In the photo's caption she joked about having a new baby in the most adorable way, writing, "New kid, who dis?"

The comments were mostly positive, with fans wishing her a happy Mother's Day, and complimenting her on how "great" she looks and how "beautiful" the baby is.

"Congratulations!! And at least the puking is over," one fan wrote.

"So cute! You look amazing Amy!," another commented on Instagram.

"Wow you sure are beautiful without makeup. You have that natural beauty for sure," another said on the social media site. "Congratulations on your handsome guy!"

Schumer revealed her son's name shortly after his birth with another sweet Instagram photo. She posted an image of her husband holding the child, captioning the Instagram picture, "Gene Attell Fischer And his dad Chris."

The child's middle name appears to be a way of honoring fellow comedian Dave Attell, whom Schumer is close with, according to People. Schumer hasn't addressed her decision to honor the comic with her son's middle name, at least not publicly.

Little Gene was born on Sunday, May 5. Schumer announced his arrival on Instagram on Monday, posting a picture of herself, Fischer, and the newborn in the hospital. She revealed that the baby came into the world at "10:55 pm last night," jokingly calling him "Our royal baby."

The child was born on the same day as the royal baby, which is where the joke stems from. Schumer's son was born before Meghan Markle and Prince Harry's, however. Gene is Schumer and Fischer's first child. The couple has been married since February 2018, following a whirlwind romance, according to Harper's Bazaar. Several big-name celebrities, including Jennifer Aniston and Jennifer Lawrence, were at the wedding. Schumer confirmed their marriage on Instagram, posting a picture from their wedding day with the caption, "Yup."

Schumer's son was born after a long hard pregnancy, during which she openly struggled with hyperemesis gravidarum, which is is characterized by severe nausea and can carry on throughout a woman's pregnancy, according to the American Pregnancy Association.

Hopefully motherhood is a cake walk by comparison. It appears to be smooth sailing so far, and fans are undoubtedly hopeful it continues that way for her and Fischer's sake. In the meantime, keep the sweet selfies coming, mama.