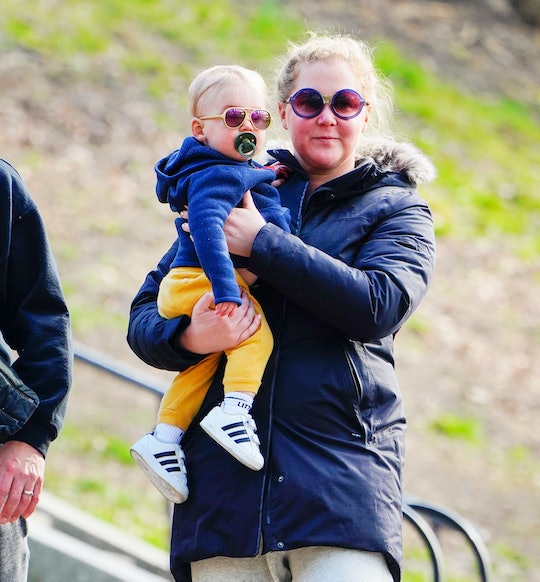 Like most parents would be, comedian Amy Schumer was delighted to have captured one of her 16-month-old son's developmental milestones on camera. But while her son's newest word caused Schumer to break out into an excited gasp and happy tears, little Gene had a decidedly different reaction. In fact, Schumer accidentally scared her son when he said "dad" for the first time.

In a video clip shared to her official Instagram, Schumer can be seen seated beside Gene, who's finishing a meal in his high-chair. "We just wanted to say, 'Hi, Daddy. We miss you. We hope you're having a fun day," she said, referencing husband Chris Fischer. Schumer then turned to Gene and asked, "Can you say 'Dad?'"

After a dramatic pause, Gene looked directly at the camera and said "Dad." Judging by Schumer's excited reaction this appeared to be the first time Gene had ever uttered the word.

But when an excited Schumer audibly gasped and broke into the happy, laughing tears that parents know so well while a friend nearby clapped enthusiastically, Gene's face quickly morphed from a smile to frightened tears. Almost immediately Schumer stopped celebrating and moved to comfort her son before glancing apologetically into the camera.

"This video was clearly a surprise to us," Schumer wrote when sharing the clip on Instagram. "Getting to experience these first moments with my son makes me feel so lucky."

Although Fischer apparently wasn't home to hear his son's first utterance of the word "dad," Schumer's adorably sweet video — and Gene's aw-inducing reaction — may just make up for missing the moment in person.

While Gene may have only just recently learned to say the word "dad," it seems he's already got the word "mom" down pat. In September, Schumer shared a sweet video clip of her coaching Gene to say "mom" while the two played. The 39-year-old mother exclaimed in joy when Gene repeated the word back to her and then covered his face in kisses. When asked to say the word again, however, Gene appeared to get a little camera shy and forgot the word, letting out instead a series of hems and haws.

"The world is burning but this was a nice moment," Schumer wrote when sharing the video of Gene saying "mom" on Instagram.

Since becoming a mom in May of 2019, Schumer has been nothing short of candid about both her motherhood journey and navigating her career in comedy as a working mom.