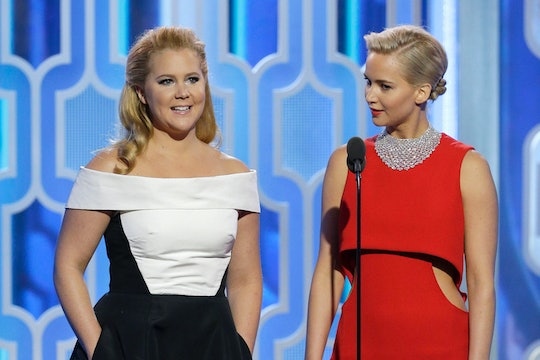 Having a baby has a way of changing everything about a person's life — from their sleeping patterns, to their daily routine, spending habits, and their overall priorities in life. Yep, parenthood can definitely be a shock to the system. With this in mind, it's not only new parents who are impacted by a the birth or adoption of a child. Because as Amy Schumer's texts with Jennifer Lawrence show, motherhood is an adjustment for friends, too.

It appears as if Schumer's BFF, fellow actress Jennifer Lawrence, is having a rough time getting used to the fact that Schumer is now a mom to a baby boy named Gene. On Tuesday night, June 18, J-Law texted her friend and new mom with an urgent question about Hulu's The Handmaid's Tale.

"You up? I have questions about hand maids tale," Lawrence texted Schumer, according to a screenshot of the text exchange shared on the new mom's Instagram Story. "It's an emergency."

"Amy!!! What did she on season 1 to deserve being in the gallows on season 2." she wrote of (I'm assuming) the series' main character, Offred/June. "I can't remember where I left off."

Who knows how long later, Schumer finally did reply to her friend. "Hi! I'm awake! She ran away."

Schumer captioned the Instagram Story with, "Everybody keeping their cool about me having a baby." LOL.

Speaking of The Handmaid's Tale, Schumer has recently discovered the horror of watching the hit series after having a child of your own. "Oh ok so I can’t watch handmaids anymore. #filledwithregret," she captioned an Instagram photo of herself snuggling baby Gene earlier this month, according to HuffPost. (Confession: As much as I love the dystopian series based on the book by Margaret Atwood, sometimes I have to stop and take a break.)

For the record, this isn't the first time Schumer has offered (hilarious) insight into her friendship with Lawrence. In April 2018, she shared a screenshot of her BFF asking to hang out with her and husband Chris Fischer, according to People. “What’re you doing tonight? You and chris wanna get dinner? Or hang?” she asked.

Lawrence then proceeded to let Schumer know she was “about to go to the park" — before suddenly canceling her dinner offer. “Haha I can’t get dinner tonight I have plans,” she wrote.

As a mom of four whose BFF has zero children, I can attest that welcoming a new baby can absolutely be an adjustment for friends. Although I think my friend has coped spectacularly, she knows there are only certain windows of time each day during which she can call and actually have a conversation with me. Otherwise, she pretty much expects to hear kids yelling in the background. You can bet she's used dealing with me constantly getting interrupted by them/having to scold them for something. And like Amy Schumer, chances are I'm not going to return a text after 11 p.m. either.

Look, Amy Schumer and Jennifer Lawrence clearly have an amazing relationship. But let's face it: So much changes after having a baby that friendships will inevitably be impacted, too. So keep resisting that urge to resent baby Gene, J-Law! (It helps that he's cute.)

More Like This
Ginger Zee Had A Perfect Response After A Troll Asked Her "Who's Raising Your Kids?"
It's A Beautiful Day In Jenny Slate’s Neighborhood
You’ve Probably Been Pronouncing “Lilibet” All Wrong
Catherine Reitman Calls It Like She Sees It: “Being A Working Mother Is Impossible”