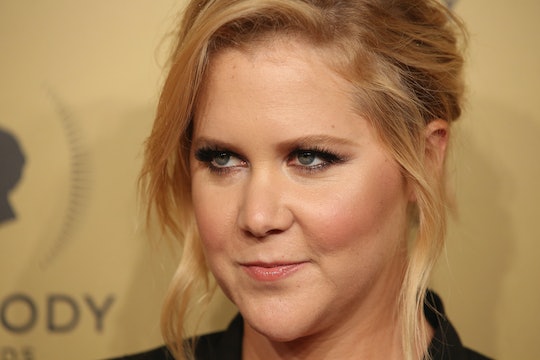 Amy Schumer has opened up a few times about what it's like to be a working parent. From sharing her mixed emotions about returning to work to explaining how her career makes her a better mom, she's all about transparency in this area. So I'm not surprised to see Amy Schumer's video of baby Gene visiting her on set, as it's a reminder for parents that your passions can co-exist. Oh, and did I mention this is the cutest thing you'll probably see all day?

Similarly to other parents out there, Schumer wasn't sure how to feel after returning to work from maternity leave. She discussed this very issue in a recent Instagram post in honor of Gene's 5-month milestone, writing, "It’s felt good to be back at work. I was so worried about it and was afraid to go back after he was 3 months old. A couple days I’ve cried from missing him."

Despite Schumer's moments of uncertainty, she revealed getting back into the swing of things has been good for her. "But it’s mostly good to be back and the breaks energize me to be a better mom and appreciate our time even more," she said.

Speaking of spending time together, Gene visited Schumer on set Tuesday, a moment she captured for Instagram. "Set visit for a million kisses," the comedian captioned an adorable clip of the two kissing and cuddling one another. Ugh, my heart.

Needless to say, countless fans fell in love with the precious clip, as one commenter wrote: "Omg he is sooooo sweet."

Someone else said: "Oh my god - too cute! Also he’s looking like mama!"

"I need to hold Gene right this minute," Savannah Guthrie chimed in.

It isn't clear what project Schumer is working on at the moment, but it's obvious she's not here for the mom-shaming. "Sending out love to the moms shaming me for doing standup last night!" she captioned a shot of herself pumping in May after she was mom-shamed for doing standup at a comedy club.

Luckily for Schumer, there are plenty of supporters in her corner. She has her husband, Chris Fischer, her sister, Kim Caramele, and tons of fans cheering her on from the sidelines. And it's great to talk about mom guilt and other working parent issues with loved ones, as fellow mom Serena Williams previously noted.

"I like communication best,” Williams said about feeling conflicted about being away from daughter Olympia, according to People. “Talking things through with my mom, my sisters, my friends let me know that my feelings are totally normal.”

Clearly, Schumer is making it work. And although I'm not privy to her life behind-the-scenes, I bet there's a team of people who help her sneak in cuddle sessions with Gene when she's on set. As for the little guy himself? I bet he's thrilled to spend these special moments with his mom, and I have a feeling this tradition will continue as he gets older. So keep your eyes peeled for more on-set videos and pics to come, folks.