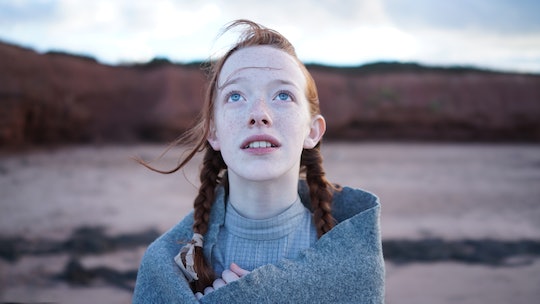 Very rarely do I watch a television or movie adaptation of one of my favorite books and get the impression that the main character of the story has leapt from the page directly onto the screen. But that is the impression I get when I watch Amybeth McNulty as Anne Shirley on Anne With an E, the Netflix adaptation of the classic Anne of Green Gables books. McNulty spoke to Romper over the phone about portraying the beloved character and what she hopes will come next for the dreamy, red-haired orphan.

On the show, as in the books, Anne charms and irritates everyone around her in equal measure with her vivid imagination, penchant for melodrama, excessive use of very long words, and habit of talking a million miles a minute. As an adult, I see maybe a little bit too much of my 13-year-old self in Anne. (Melodrama was kind of my thing as a tween.) Speaking to McNulty, the 16-year-old actress who plays Anne, it's clear that she identifies with the high-spirited character as well. "We’re both book worms. We both adore the world and nature. We both talk far too much," McNulty laughs, but adding, "I absolutely adore Anne."

For the uninitiated, Anne of Green Gables takes place at the end of the 19th century on Prince Edward Island in Canada. Anne Shirley, an orphan, is accidentally adopted by a brother and sister pair who grow to love her as their own. McNulty's mother gave her a copy of Anne of Green Gables when she was nine, so she says the story was a part of her childhood. The era, too, was familiar to McNulty — another favorite of hers is Little Women (her first name is actually a portmanteau of two characters from the book, Amy and Beth). McNulty gushes that she has seen all the film adaptations of it. "I love those kinds of older movies. They're definitely more of my thing, I guess." (Girl, same.) Perhaps this is why McNulty looks right at home in the 1800s on the show.

As far as the future goes, the story in Season 2 diverged from the original books, so there's no telling what's next for young Anne. In the novels she eventually goes to college, rejects several offers of marriage, becomes a teacher, and (of course) marries Gilbert Blythe. If that is the same path Anne on the show is going to take, McNulty isn't saying. Though she admits she does know vaguely where her character is headed. "I’d be very into playing her for 16, 17, 18 that kind of age because that’s such an incredibly tricky time for everyone," McNulty says. "And I think especially for Anne because that’s really her starting her life. She says in the series, you know, 'This is my first year of childhood.' And now we’re gonna kinda see her become a woman."

Of course, McNulty herself is still a teen. So for me, whether Anne With an E follows the path laid out in the books or goes a new way, I'm looking forward to seeing the young actress grow right alongside her character.