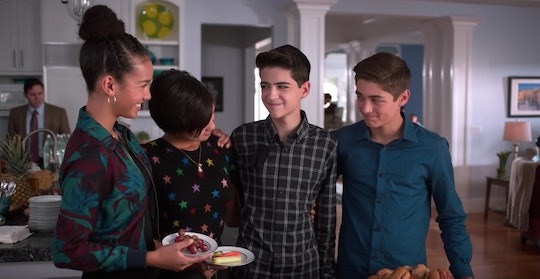 As members of the younger generations explore their identities and pick up the baton of the ongoing fight for equality, they look to society for information. For that reason, representation in media is more important today than ever before. Making history and a powerful statement all at once, Andi Mack's coming out story on The Disney Channel has Twitter cheering for this history-making LGBT win.

The Disney Channel first announced that Andi Mack would include a gay character arc back in 2017, according to Out. Since that announcement, viewers and champions of equality alike have been waiting with baited breath for those two magic words: "I'm gay."

When Joshua Rush, who plays the role of Cyrus in the hit Disney Channel series came out as gay to his male friend during an episode of Andi Mack earlier this month, he became the first Disney Channel character to say those two words, as well as the first openly gay character on the channel, according to BuzzFeed News.

The scene aired last week and showed Cyrus guiding his friends around his grandmother's shiva — which is the week of mourning observed by Jewish families who have experienced the loss of a loved one. In the midst of his mourning, Cyrus finds the opportunity and the courage to come out to his best guy friend, Jonah, played by actor Asher Angel, as HuffPost reported.

When speaking to Good Morning America, Rush described playing Cyrus as "one of the most fun things I've ever done in my life." And as for the reaction to his use of the word "gay," Rush said that it was "overwhelmingly positive." He added, "over the last few days I've really gotten to see the myriad of ways that both this new coming-out scene for Cyrus, and this Jewish representation of his family, has affected the fans."

That "overwhelmingly positive" reaction is certainly present on Twitter, where fans of the show expressed their glee with lots of tweets in all-caps and heartfelt messages.

Many of the tweets also expressed a desire to have had something similar on TV during their own youths. Jonathan Hurwitz, who wrote this episode of "Andi Mack," entitled "One in a Minyan," explained in a blog post he wrote for GLAAD that he drew from his own personal experience for the story "as someone who’s Jewish, has dealt with long-term anxiety, and has come out to his friends and family." He wrote:

In the writer’s room, I shared a personal story about how nervous I was to come out to a college friend back in 2010. While grabbing burgers one afternoon, he asked me to pass the ketchup, so I handed him the bottle while mumbling the words, "I’m gay." He looked up at me, said "Cool," then proceeded to put ketchup on his burger as if I hadn’t just revealed my most personal, deepest truth.

Much like Cyrus does in the clip, Hurwitz said he reacted with a bit of shock to his friend's level-headed response. "I remember thinking: That’s it?! After a ten-year journey to come out to myself, I finally come out to my friend and all I get is a 'Cool?!'" he wrote. "But what I ultimately realized was that my friends and family loved me unconditionally before I’d even learned to truly love myself."

Along with including a gay character, Andi Mack excels in other areas of representation and inclusion as well. As one Twitter user pointed out, it includes storylines on anxiety, Jewish culture, teen pregnancy, learning disabilities, and much more. This was no accident; Disney is well aware of the need for messages of inclusion.

As spokesperson for the network told Variety, "Andy Mac is a story about ‘tweens’ figuring out who they are; Terri Minsky, the cast and everyone involved in the show takes great care in ensuring that it’s appropriate for all audiences and send a powerful message about inclusion and respect for humanity."

The Disney Channel is improving leaps and bounds when it comes to representation, and Cyrus on Andi Mack is a great example of that. I can't wait to see what comes next — and neither can Twitter.