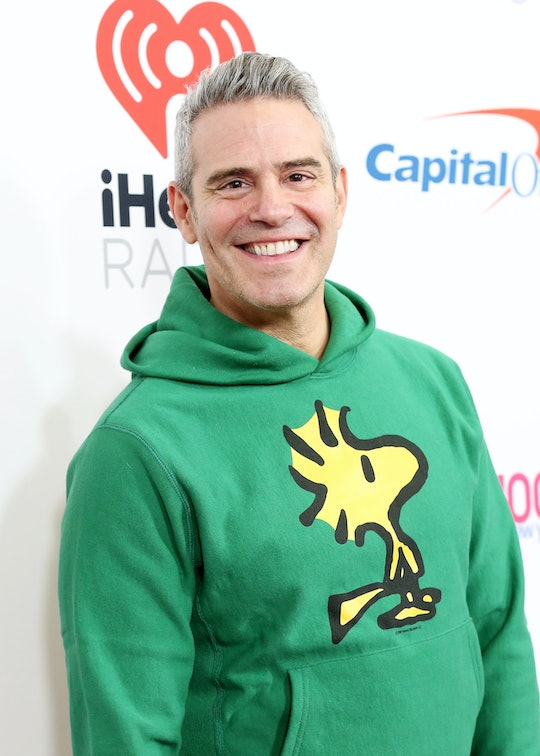 Congrats Are In Order: Andy Cohen Welcomes A Baby Boy Via Surrogate

Oh, baby! The wait is officially over. A little over two months after revealing he was expecting a child via surrogacy, Andy Cohen announced that he welcomed a baby boy on Monday evening and he couldn't be happier. The proud dad and his new little one shared some sweet skin-to-skin and Cohen shared the heartwarming experience with his many followers.

Just hours after his little bundle of joy made his arrival, Cohen shared the news with his substantial following on Instagram, as People reported. Along with celebrating his baby's arrival, Cohen used the announcement as an opportunity to share his son's name — and the meaning behind it.

"WOW! This is my son, Benjamin Allen Cohen. He is 9 lbs 2 ounces !! 20 inches," Cohen wrote on Instagram. "Born at 6:35 pm PT He is named after my grandfather Ben Allen. I’m in love. And speechless. And eternally grateful to an incredible surrogate. And I’m a dad. Wow."

The decision to share his big news with the world so soon after Benjamin's birth is not surprising considering Cohen's continued candor about fatherhood. He first announced that he was expecting a baby via surrogacy in late December and has been open about his overwhelming emotions ever since.

After announcing his surrogate's pregnancy days before Christmas, Cohen shared the sex of his baby during CNN’s live New Year’s Eve show. "I remember last year standing here thinking, 'Will my baby be born this year?'" he said to the show's co-host Anderson Cooper. "So, this is the biggest year for me." When Cooper asked if Cohen was interested in sharing the baby's sex, Cohen responded with a smile, saying, "It's a boy," according to Entertainment Tonight.

He repeated the short sentence three full times, making his genuine bliss over the news clear. According to Entertainment Tonight, he expanded on the announcement, saying:

And, I got to tell you something, I can not wait to meet this boy. I think he’s going to have a nice Semitic head of hair. I'm so excited I think about nothing else. I just never thought it would be possible as a gay man to grow up and have a family. And, then here we are in 2018, almost [2019], and anything's possible.

Cohen went on to thank his surrogate. "I'm so grateful to a wonderful surrogate that I'm working with," he said. "I turned 50 this year, and it takes some people longer to get to that place and it took me this time."

The wait was certainly worth it. Cohen has amassed quite the support system to celebrate baby Benjamin, exhibited by the massive baby shower thrown for Cohen by the Bravo housewives and Cohen's bestie John Mayer. Guests enjoyed a comprehensive A Star Is Born themed details that went from a wall of white flowers complete with a blue hydrangea star down to a gorgeous three-tier gold and white cake, as People reported.

Appropriately, Cohen documented the special day in a series on Instagram posts showing the numerous guests and the lavish spread that they enjoyed. "I'm speechless," he wrote. "Every house with featuring John Mayer." These friends were also quick to share their congratulations and well wishes with Cohen on social media from the moment he made his announcement, and they echoed these sentiments following Benjamin's birth.

Mayer posted a photo in Instagram of some teeny tiny baby moccasins he recently gifted Cohen, writing “Congratulations Andy!” Cohen quickly responded with, “I love you. I can’t wait for you to meet him tomorrow.”

The newborn days and can be long and difficult, even with a baby as sweet as Benjamin. But knowing that you have good friends — not to mention an army of housewives — on your side makes all the difference.

More Like This
Priyanka Chopra & Nick Jonas Marked A Fun Summer Milestone With Baby Malti
Nick Cannon Welcomes Baby #8, His First With Bri Tiesi, In Beautiful Home Birth
Khloé Kardashian Made A Cute Little Nod To Her Newborn Son With A Tiny Blue Accessory
Khloé Kardashian Has Welcomed Baby #2 Via Surrogate & Is Keeping The Name A Secret