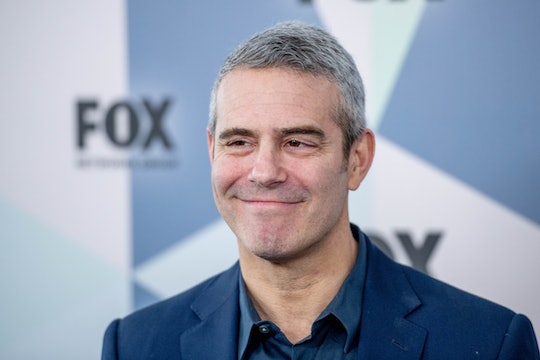 Nothing rivals the joy of becoming a parent. The hope, excitement, and anticipation is truly unparalleled. And one more person, everyone's favorite Bravo host, is preparing for that experience. Late on Thursday night, Andy Cohen revealed he's expecting a baby via surrogate with the absolute sweetest announcement.

Cohen's little bundle of joy is expected to arrive in just six short weeks. He first revealed the happy news during Thursday’s episode of Bravo’s Watch What Happens Live, as People reported. “Tonight I want to share a little personal news of my own," he said. “To the viewers at home, I call you my friends at home because we are friends ... This has been an incredible joyous journey with you all. I am grateful to be able to live my dream every day and grateful to you for coming along for the ride.”

His decision to share the "personal news" with viewers is part of his policy of being as "transparent as possible" when it comes to his life. “Tonight, I want you to be the first to know that after many years of careful deliberation, a fair amount of prayers and the benefit of science — if all goes according to plan in about six weeks time I’m going to become a father,” Cohen said.

Cohen's announcement did not include the sex of the child or any information about the surrogate mother. The dad-to-be also has yet to comment on if he will be raising the child on his own. In March, he shared that he is, indeed, single, according to Bravo TV. He is on the lookout for a potential partner, though. He told Entertainment Tonight that he is looking for “someone who’s very independent, someone who has their own thing going on." Oh, and, “Maybe someone who’s never seen The Real Housewives.”

But even if Cohen is going it alone, he said in his announcement that growing his family is something he has always wanted, he said:

Family means everything to me and having one of my own is something that I have wanted in my heart for my entire life. Though it’s taken me longer than most to get there, I cannot wait for what I envision will be the most rewarding chapter yet.

Congrats!!! So happy for you! I bet your parents are so excited!!!!!" one person wrote.

Another common sentiment was how wonderful of a father he will be. "You’re going to be a great Papa," said one user.

Similarly, another wrote, "Awww! Congratulations!!! You'll be a great dad. so happy for you."

Cohen's efforts at transparency have made his followers feel particularly close to him. "I’ve never been so happy for someone I don’t know! MAZEL!!" commented yet another fan.

Along with supportive strangers, Bravo stars also sent Cohen their love on social media, according to People. Real Housewives of Beverly Hills star Lisa Rinna tweeted, “I’m so beyond happy for you Andy." Real Housewives of Potomac‘s Candiace Dillard also congratulated Cohen on his "Bravo baby," writing: "You are giving us a BRAVO BABY, I almost criiiiiieddd!!!! Wishing you so so so many congratulations, well wishes and blessings!!!! He or she will undoubtedly have your charmingly crooked smile and win at life for ever [sic] and ever amen. Love it!!!!! Congratulations again!!!!"

The outpouring of love and support for Cohen as he embarks on his journey of fatherhood is proof of the amazing support system waiting for his little one. Congratulations, mazel tov, and good luck to you, Andy Cohen!