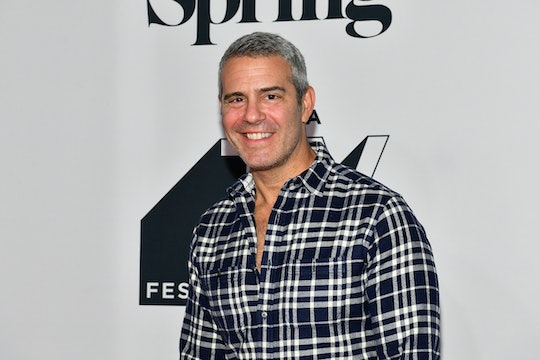 After Bravo's Andy Cohen welcomed his first child into the world earlier this month, fans of the network were so excited for the Watch What Happens Live host. But no one was more excited for the new dad than his biggest fans around — the many stars of the Real Housewives franchise, many of whom Cohen seems to be pretty close to. So, it makes sense that Andy Cohen says he's gotten parenting advice from Real Housewives stars, but he actually has so much advice to choose from.

On Feb. 4, Cohen welcomed son Benjamin Allen into the world, according to People, and became a dad for the first time. In an Instagram post, the king of the Real Housewives franchise on Bravo wrote that he had nothing to say for the first time (and he always has something to say, as fans know very well). "I'm in love. And speechless," Cohen wrote in the Instagram announcement. "And eternally grateful to an incredible surrogate. And I'm a dad. Wow."

Since Cohen is figuring out how to be a parent for the first time, he has received a lot of advice from people trying to help him out. And what better people to give parenting advice than the stars of the Real Housewives franchise — many of whom have raised kids both on and off camera.

It sounds like he is pretty appreciative of all of that advice he's received, even if he ultimately may not be completely keen on taking all of the advice. Cohen told People:

The Housewives have given me a lot of advice. All their mom instincts came out. As loud and aggressive and wild and dramatic and everything you want to say about the Housewives, as much of all of that as they are, they're all moms pretty much. And they're all good moms. They all really surrounded me and just wanted to protect me and help me in the sweetest, most humane and lovely way that has just continued to tickle me. They've all been so lovely.

As dramatic as they are on the show, the Housewives do really want what is best for Cohen. And this was made clear in January when dozens of former and current Real Housewives turned out to celebrate Cohen at his baby shower, as Bravo noted.

Surely, there is a lot of advice for Cohen to choose from, though. After the franchise made its debut on Bravo in 2006, there have been more than 100 housewives who join the franchise among nine different locations across the nation over the years, according to website Reality Blurred — and a majority of those housewives are moms themselves. So a lot of episodes of Real Housewives do tend to focus on the women, their relationships with each other, and the drama in their lives. But the show also focuses on the housewives' lives at home and their interactions with their families.

Although these moments with their kids might seem a little awkward or cringe-worthy at times, they depict real moments of motherhood. This is awesome — it's great that these moms aren't afraid to let people see how they parent and raise their kids. While many people may not want anyone and everyone to see the highs and lows of their relationships with their kids, the Real Housewives cast bares it all. A lot can be learned from watching them, and even Cohen clearly seems to think so. Plus, he also has the benefit of interacting with them and getting to know them, so it's not just about what's shown on TV.

Real Housewives of New York City cast member and mom of one, Bethenny Frankel, told People that she has one key piece of advice for Cohen when it comes to raising his son. "There is no perfect child nor perfect parent," Frankel said.

If the Real Housewives franchise has taught viewers anything is that there is definitely no such thing as a perfect parent. And after watching as much Real Housewives as Cohen has, he almost certainly knows this to be true.