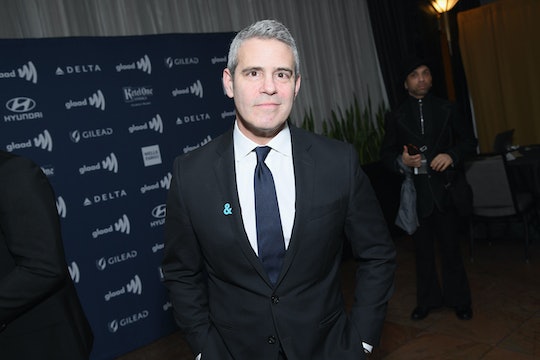 In February, Bravo's Andy Cohen welcomed his first child into the world. This was so incredibly exciting for the Watch What Happens Live! host, especially since his life has already changed so much since giving birth. During a new speech, Andy Cohen says his son's birth has inspired him in so many ways, and this is something that parents can definitely relate to on different levels.

Cohen was presented with the Vito Russo award for activism at the GLAAD Media Awards as an "openly LGBTQ media professional" who has helped further acceptance, according to People. And during his speech, Cohen opened up about how being a father at 50 has not only inspired him as a person, but as an activist, too. He welcomed his son, Benjamin Allen, into the world through a surrogate in February, according to CNN. "The fight is not over, and it's a fight that I'm committed to — even more so now, as a father," he said, according to People.

It's awesome that Cohen's son has been able to inspire him to fight more in the past three months. Becoming a parent is a formative experience unlike any other. It inspires people to make an impact and to make the world better for their kid who will be growing up in it. And that exactly what Cohen wants to do for his son.

"When Benjamin was born three months ago, I looked into his eyes and I saw that there was no hate, no bias, no bigotry — just love," Cohen said during his speech.

Having this new found perspective clearly made an impact on him. "That's how we come in to this world and that's how hopefully one day we can live in it," he added. He has a point — parents should want to strive to make their kid's lives better in any way that they can. And that's exactly what Cohen said he'll do for his own community and his son.

Cohen has been outspoken about his activism in the past. Through his platform as a celebrity and Bravo super star, Cohen has been able to speak about issues he believes in. In 2016, he endorsed Hilary Clinton for president, according to Entertainment Weekly. That same year, he had current Governor of California, Gavin Newsome, on Watch What Happens Live, and described him as his "favorite politician," according to The Los Angeles Times. Needless to say, he hasn't shied away from trying to make this world a better place for his son. Who wouldn't be inspired with a kid this cute?

In February, Cohen admitted to People that his decision to become a single parent was "heavy," according to People. But he added that he has never felt more ready to be a dad. "I knew that I was turning a page on that chapter in my life," he said. "It's not to say that I can't go to a party anymore, but things are changing."

Things clearly have changed for Cohen — he has a new perspective on his life that he never had before. There are no doubts that his son will inspire him to do great things.